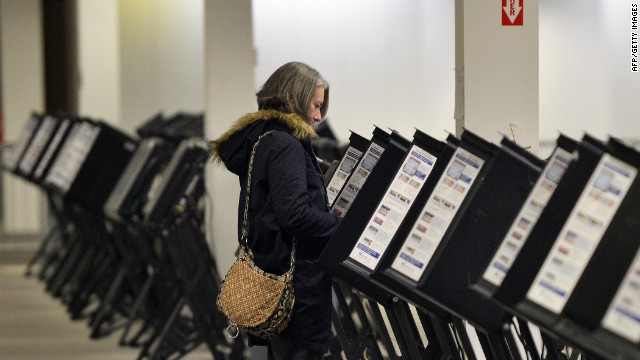 (CNN) - Hours ahead of the presidential debate on Monday, millions of voters across the country will have the chance to cast their ballots when early voting opens in Arkansas, Colorado, Texas, Wisconsin, Alaska and the District of Columbia.

Nevada began early voting on Saturday, a day after Washington state, bringing the early voting total to 29 states and the District of Columbia.

As of Monday, early voting will take place in six of the nine battleground states identified on CNN's Electoral Map - Colorado, Iowa, Nevada, North Carolina, Ohio and Wisconsin. Only Virginia and New Hampshire don't allow voters to cast ballots early without an excuse, such as being out of town on Election Day. Early voting in Florida begins next weekend.

Approximately 35% to 40% of eligible voters are expected to cast their vote before Election Day, according to early voting experts. That's 5% to 10% more than those who voted early in 2008.

Since 2000, early voting has become more popular in states across the country. As a result, campaigns have shifted their voter turnout strategies to the earlier voting dates.

Thirty-five states and the District of Columbia offer some form of early voting – either in person at polling stations or by in-person absentee voting.

As of Saturday morning, more than 3.5 million Americans have cast their ballots, according to voting statistics cited by the United States Election Project at George Mason University.

Campaigns and politicos watch in-person absentee ballot requests and returns closely as well as early voting turnout numbers at the polls in an effort to identify trends in important battleground states.

CNN's Adam Levy and Robert Yoon contributed to this report