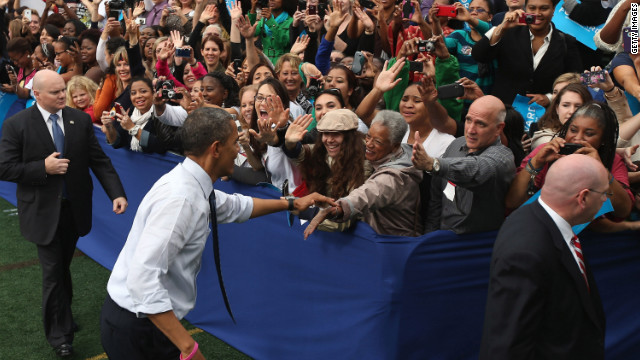 (CNN) - President Barack Obama will embark on a whirlwind tour of battleground states Wednesday in Iowa before becoming the first sitting president in modern history to cast an early ballot in-person.

On the "non-stop" tour, Obama will rally supporters and volunteers in key swing states and try to appeal to undecided voters. The president will make phone calls to undecided voters while aboard Air Force One in between his tightly packed schedule of campaign stops.

Seeking to motivate his supporters to go to the polls, Obama will cast his ballot early in his hometown of Chicago, Illinois, on Thursday. First lady Michelle Obama submitted her absentee ballot on Monday in Illinois.

During the tour, the president plans to visit six of the nine battleground states, making stops
Wednesday in Denver, Colorado, and Las Vegas, Nevada, before heading to Tampa, Florida, and Richmond, Virginia, on Thursday. He will end the 48-hour tour in Cleveland, Ohio, on Thursday.

Recent polls in several battleground states underscore how tight the race is between Obama and his Republican challenger Mitt Romney.