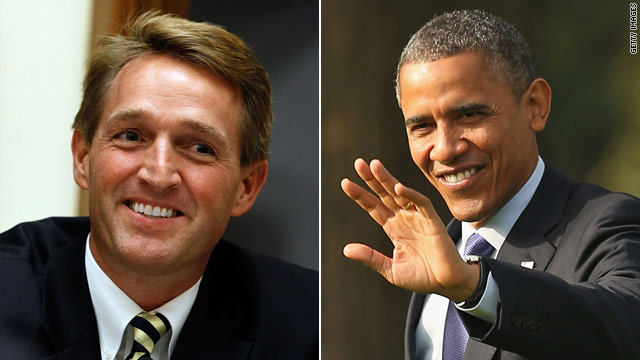 Sparring over economy in weekly addresses

(CNN) - President Barack Obama touted a recovering housing sector while Rep. Jeff Flake of Arizona argued that the administration has not handled the economy well during their weekly addresses Saturday.

"Now, we’re not where we need to be yet," Obama said. "But one of the heaviest drags on our recovery is getting lighter. Now we have to build on the progress we’ve made, and keep moving forward."

Obama talked about his efforts on the issue, which he also discussed in an interview on “The Daily Show” this week.

"We secured a $25 billion settlement from the biggest banks – one of the biggest settlements in history – and used it to provide relief to families all across America," he said in his address.

But the government has left untouched the majority of a $50 billion program to prevent foreclosures.

A report released Friday by the National Association of Realtors showed that sales of previously-owned homes slipped last month compared to August, though the rate was up 11% from September of 2011

Obama said more could be done if Republicans were on board,

But Flake said the president's party is to blame for stagnation.

“While House Republicans have passed a budget that addresses our challenges head-on, Democrats in the Senate have failed to even attempt to do their homework. They have not passed a budget in over 1,200 days," he said. "Though the private sector is straining under the financial uncertainty facing the economy, perhaps worse yet is the regulatory certainty this administration appears bent on guaranteeing."

Flake said under Obama's term, house values have dropped and gas prices have doubled. Unemployment has shown no overall improvement since the president first took office, he said, while the federal deficit has increased.

“President Obama undoubtedly inherited a fragile economy, but he’s done little to improve it," the Arizona Republican said. " In fact, rather than take a lesson, his answer to persistently weak jobs numbers is pressure to spend another half a trillion taxpayer dollars on legislation that would fail to even take steps to deal with the economic slowdown."

“It is my hope that the recess from fiscal sanity that the last four years have represented is over,” he said. “As bad as our fiscal challenges are, it’s not too late. The bell has rung and it is time for us to get to work.”

Obama, too, expressed the need for action, saying, “Let’s be honest – Republicans in Congress won’t act on this plan before the election. But maybe they’ll come to their senses afterward if you give them a push.”

But Republican and Democratic members of Congress alike are out of town this month, many campaigning for re-election.

Obama will be campaigning, too – starting with a Monday debate over foreign policy with GOP presidential candidate Mitt Romney.