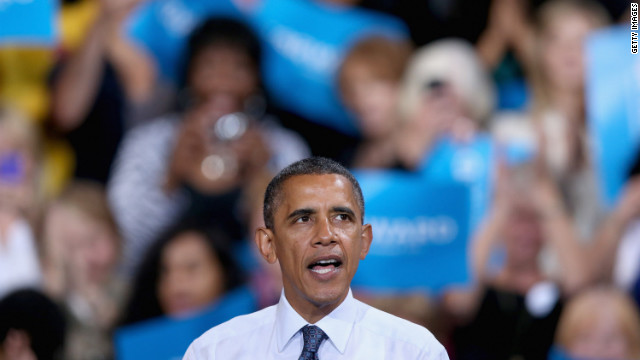 The Durango Herald in Colorado threw its support behind the president, as it did in 2008, arguing that Obama has performed reasonably well despite the obstacles he inherited when taking office.

"Barack Obama is an imperfect president, of course, and to what extent he can achieve his goals for the nation remains to be seen," the paper's editorial board stated. "But he has and can articulate a vision for a better, fairer, more successful America. His opponent offers nothing of the sort."

CNN rates Colorado, with nine electoral votes, as a "toss-up" state on its Electoral Map. Both campaigns have aggressively courted Colorado voters, a state that went from red to blue for Obama in 2008.

An American Research Group survey released before the second presidential debate showed Romney ahead of Obama in Colorado by four percentage points, 50%-46%, a margin that fell within the poll's sampling error.

The Durango Herald joins the Denver Post, the largest newspaper in Colorado, in its support for the president.

In North Carolina, another heated battleground, the Asheville Citizen Times chose to back the president on its editorial page. The newspaper's editorial board wrote it was unclear where Romney stood on certain positions, such as health care and environmental policies.

"With Obama, we know what we are getting. He has consistently embraced the concept of community. Obama believes we are not just a bunch of individuals but a nation, and that we must work together to address the challenges we face."

North Carolina, the site of this cycle's Democratic National Convention, made political headlines this week after Romney's team moved staff members away from campaign operations there, saying they felt confident about winning the state.

"We feel confident in our operation there and we're continuing to compete for every single vote," she said Thursday on CNN's "The Situation Room with Wolf Blitzer."

An American Research Group survey released on October 1, before the start of the debates, showed Romney ahead of Obama by four percentage points, 50% to 46%, among likely voters.

The Akron Beacon Journal of Ohio also printed ink for Obama. With the race tightening up in recent weeks, Ohio as has seen increased attention as polls show the state could be a decisive factor in the final results.

While the editorial board criticized the president for lacking "political skills" and "address more directly the battered housing market," the board wrote that Obama has set solid measures in place.

"What is telling about a presidency is its tilt, its direction, spirit and priorities. Thus, to those who argue the president lacks a plan for a second term: Look at the foundation that has been set. He has used the levers of government to bolster the economy, investing in education, innovation and health care, understanding the essential role of the public sector in competitiveness," the paper wrote.

A Fox News poll taken after the second presidential debate indicated Obama had a three-point advantage over Romney, 46% to 43%. The state, with 18 electoral votes is rated as a "toss-up" on CNN's Electoral Map.

The Beacon-Journal, which also endorsed Obama in 2008, joins the Cleveland Plain Dealer, Ohio's largest newspaper, in its backing of Obama. The Columbus Dispatch, however, endorsed Romney.

In New Mexico, the Santa Fe New Mexican wrote that Obama "earned" a second term. Citing the auto industry bailout and the killing of Osama bin Laden, and health care reform, the editorial board wrote that Obama has more to do in another four years.

"To Obama, government is not the enemy. It is not dispenser of all wisdom or wealth, either. Government is the safety net that catches the weak, the sick, the old and the very poor. It is also our collective will in action – building, defending and securing our nation."

With five electoral vote, New Mexico is rated as "leaning Democratic" on CNN's Electoral Map. Obama carried the state in 2008 by 15 percentage points. Recent polls show Obama with a consistent advantage over Romney.