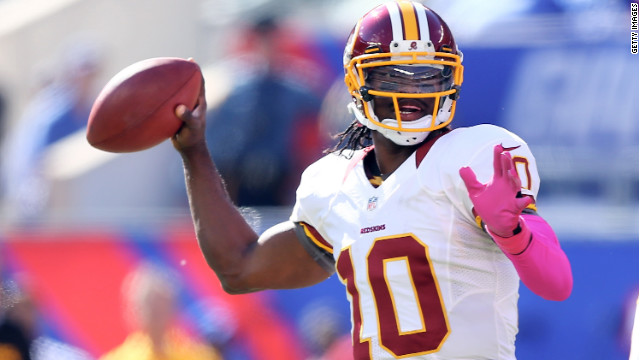 In a tribute that aired Sunday on Fox Sports, both presidential candidates, speaking in taped appearances, praised the new Washington Redskins star quarterback for having the unique ability of bringing the city together.

"RG3 hasn't been in Washington very long, but he's already created change," Romney said in the video. "(He) has really struck a chord with sports fans, uniting Democrats and Republicans."

Romney wished him luck as he leads his team against the New York Giants, winners of Super Bowl XLVI in February. The Redskins chose Griffin - the second overall pick in the draft - in April, months after the athlete won the Heisman Trophy while at Baylor University.

Since playing in the National Football League, Griffin has already hit a number of milestones, including an impressive 76-yard touchdown run in last Sunday's game against the Minnesota Vikings.

Obama, a Chicago Bears fan, agreed that Griffin had a rare talent.

"It's tough to unite this city around anything. Believe me, I know. But RG3 makes it look easy," the president said. "He's a great young man, and a heck of a lot of fun to watch."

Obama concluded his remarks by extending an invitation.

"Robert, you're welcome at my house for a pickup game any time."