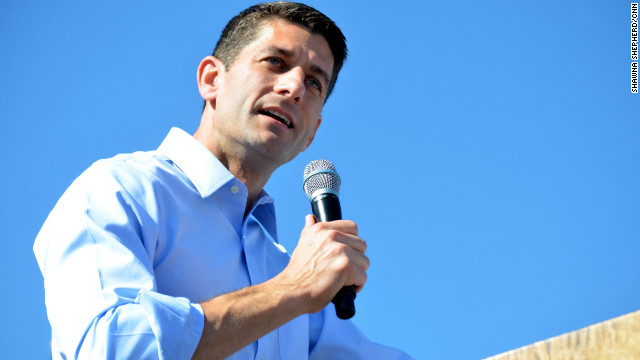 Ryan says election 'within our grasp' in Iowa

The Republican vice presidential nominee spoke before energetic crowds of nearly 800 people in Sioux City and a similar-sized crowd in Council Bluffs on Sunday, the same day a new national poll was released that shows the race for the White House in a dead heat.

“We need your help. Iowa you are so used to it. You are used to being the eye of the storm. You are used to seeing this. You have a responsibility and an opportunity and an obligation to help us get this country back on the right track so that we look back on this moment as when we reclaimed our freedoms, when we got our jobs back, when we got our economy growing,” Ryan said in Council Bluffs.

“This is within our grasp,” the Wisconsin lawmaker continued, “So Council Bluffs, Cornhuskers, Hawkeyes, and everybody in between, even my fellow Packers fan and Badgers fan, which I see a few of you in the audience - OK, maybe four.”

Both campaigns are making a push for the state’s six key electoral votes, which President Barack Obama won in 2008 with a sizable 10-point lead over his Republican opponent, Arizona Sen. John McCain.

Vice President Joe Biden paid a visit to Council Bluffs on October 4, which marked his sixth visit to the Hawkeye state. He made an impromptu stop at a Hy-Vee store and held a rally that had a smaller turnout than Ryan’s event outside the Bass Pro Shops, but it is an area that McCain won four years ago.

It was Ryan’s first time campaigning through western Iowa since he joined the Republican ticket on August 11 but he has made a number of trips to the state, including a bus tour across eastern Iowa, where his wife Janna’s family is from, in early October

In Iowa on Sunday, Ryan did not specifically ask anyone to vote early, but in Sioux City the Republican vice presidential hopeful reminded them of the promises Obama made the last time around.

“You see, the man we heard four years ago offering hope and change is the very kind of candidate he was then criticizing. He has become what he criticized,” he said at the rally held at Bev’s restaurant overlooking the Missouri River.

CNN's Allison Brennan and Shannon Travis contributed to this report.