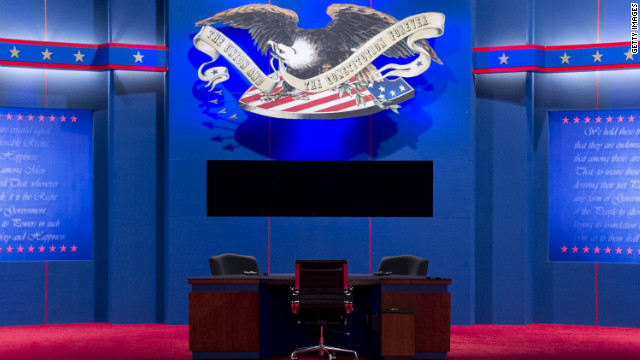 TONIGHT’S TOPICS: The debate will be broadcast at 9:00 p.m. ET from Lynn University in Boca Raton, Florida. The format calls for six 15-minute segments, each of which will focus on one of these topics:

TRAIL TRIVIA
(Answer below)
What university has hosted the most debates since 1988?

Who would have thought a president credited with killing Osama bin Laden would be defending himself on the issue of foreign policy two weeks before Election Day?

After holding a commanding lead over Mitt Romney on foreign policy, President Barack Obama finds himself on the defensive after terrorists stormed the U.S. mission in Benghazi killing the U.S. ambassador and three Americans.

Obama addressed the issue head on at last week’s debate, but tonight, in the battleground state of Florida, Benghazi is likely to be a jumping off point on the broader issue of terrorism, as other issues such as Iran’s nuclear ambitions and the looming giant China also take center stage in this final head-to-head meeting of the two presidential contenders.

As we watch these two candidates make their case to the voters, we realize Romney and Obama face a different set of challenges, but they do share a common goal: convincing undecided voters that they deserve the opportunity to lead the nation during these troubled times.

Unlike the economy, Mitt Romney hasn’t had much of an opportunity to outline his global vision on a broad scale. Tonight tens of millions of voters will be watching this evening’s debate. Romney did stumble during his trip to Europe this summer, but that moment is gone and the focus is on now. Romney’s primary goal tonight will be to convey to voters that he has the gravitas to be commander-in-chief, a senior Romney aide tells us.

In addition, we also expect Romney to try and discredit the Obama administration’s approach to foreign policy, a theme promoted last night by his vice presidential nominee running mate Paul Ryan during a campaign rally in Colorado.

For Obama, his challenge is to convince undecided voters the nation is indeed safe and emphasize that the decisive decisions he has made, such as calling for the strike to kill bin Laden, is the true mark of a leader. Last week, Obama answered Romney on the Benghazi issue by appearing presidential, not political when he addressed the issue.

In a few hours, we will see which candidate rises to his individual challenges: Can Romney pass the commander-in-chief test and can Obama convince voters that he deserves another four years.

Leading CNNPolitics: 5 things to watch in tonight's debate
President Barack Obama and Republican challenger Mitt Romney meet Monday night in the last of their three debates, this one focused on foreign policy. Unlike last week's contentious town hall-style debate in which the candidates ambled around the stage and parried with each other, Obama and Romney will be seated at a table with moderator Bob Schieffer. – Peter Hamby and Paul Steinhauser

Leading Drudge: Foreign Policy
When President Obama and Mitt Romney sit down Monday night for the last of their three debates, two things should be immediately evident: there should be no pacing the stage or candidates’ getting into each other’s space, and there should be no veering into arguments over taxes. This debate is about how America deals with the world — and how it should. – David Sanger for the New York Times

Leading Politico: Democrats face 'fight of our lives' to win Florida
Florida Republicans are feeling increasingly optimistic that Mitt Romney will carry the biggest of swing-state prizes, and for good reason — he’s narrowly leading in most every poll here and President Barack Obama is under 50 percent in the same surveys. – Jonathan Martin and James Hohmann

Leading The New York Times: Campaign Boils Down to Door-to-Door Voter Drives
Get-out-the-vote efforts have moved front and center for both campaigns, particularly here in Florida, reflecting the tightening of the race in all the battleground states and nationally. The latest poll confirming the trend was an NBC News/Wall Street Journal national survey released on Sunday, which showed a dead heat nationally with each candidate favored by 47 percent of likely voters, and underscored how Mr. Romney was continuing to make gains among female voters while holding a comfortable lead among men. – Trip Gabriel

- Folks, the choice is optimism vs. pessimism -
VICE PRESIDENT JOE BIDEN AT A CAMPAIGN EVENT IN OHIO: “I have never seen two candidates for the highest office in the land who are more negative about the state of the country, who are negative about our prospects for the future and more negative about the willingness of the American people to do whatever it takes to make it right. All this talk they have about this culture of dependency, about America being in decline - I honest to God don’t recognize the country they are talking about.”

- Important on the stump: local sports references -
REP. PAUL RYAN AT A CAMPAIGN EVENT IN COLORADO: “Most of the countries we compete with – they tax their businesses at 25% or less. But President Obama is using class warfare and trying to make you think that we are just taxing people like Peyton Manning or John Elway or some movie star or Wall Street guys, we are actually taxing these small businesses that are the engine of opportunity, the ones that provide most of our jobs. When we tax our businesses more than our foreign competitors tax theirs - they win we lose and we can’t stand for that.”

- McCain ratchets up the rhetoric -
SEN. JOHN MCCAIN IN A SPIN ROOM INTERVIEW WITH CNN'S ACOSTA: “How do justify over 30,000 people being massacred in Syria and I've heard him speak out on their behalf once - once - while arms are pouring in from the Russians, Iranians are there on the ground. And what has this administration done? Absolutely nothing. ... And on the Libya thing, it's either absolute and total incompetence, or willfully deceiving the American people.”

- Surrogates frame Libya issue on CNN’s “Starting Point” -
REP. CHRIS VAN HOLLEN: “It's just ironic to hear many of the folks on Mitt Romney's team who were there during the Bush administration, who were part of what was probably the greatest intelligence failure we've ever seen, which were the attacks of September 11th, 2001, coming forward now to try and cast aspersions on the president, on his team. What we now know from the report that you just cited, is that the president and his team briefed the American people on the information they knew, as they knew it. And, this effort to try and spin some kind of conspiracy theory that Mitt Romney and his team had been doing from day one, is clearly way off base.”
FORMER NEW YORK CITY MAYOR RUDY GIULIANI: “If the president had been privy to the information beforehand that there were numerous attacks there, planned attacks including two on the embassy, one in April, one in June, in which a hole was blown in the wall of the embassy, now all of a sudden you get an attack on September 11 and you're scratching your head about it? My goodness, if it wasn't a cover-up then the ineptitude of this administration is startling. It really can't be trusted to protect us.”

Washington University in St. Louis, Missouri has hosted the most presidential debates since the Commission for Presidential Debates began organizing the contests in 1988.

Starting in 1992 and through 2008, the school in suburban St. Louis was selected to host a debate in five straight election cycles. Though that streak ended in 2012, the commission did name Washington University the debate alternate site.

A number of historically memorable debate moments have occurred at Washington University.

Who could forget the, “Can I call you, Joe,” debate? The last debate at Washington University, a vice presidential showdown between Joe Biden and Sarah Palin on October 2, 2008, featured a number of memorable moments.

Congratulations to Jonathan Kappler (@jonathankappler) for correctly answering today’s Gut Check trivia question. Even though you answered with a question mark at the end – which we assume means you were guessing – you were the first to tweet “Washington University.”