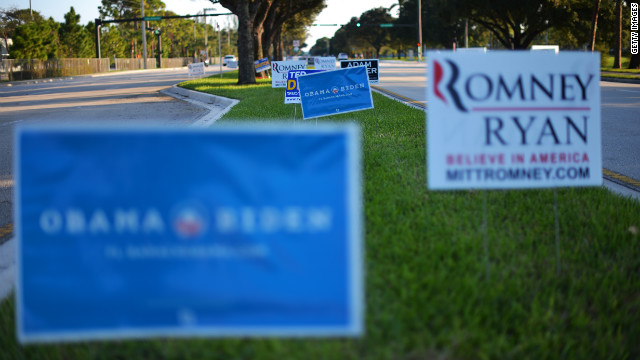 (CNN) – The latest collection of polls in Ohio shows a razor thin margin between President Barack Obama and his rival Mitt Romney in the key battleground two weeks ahead of the November 6 election.

The CNN Poll of Polls shows Obama at 48% and Romney at 45% in Ohio, which carries 18 electoral votes. Those numbers are an average of three Ohio polls of likely voters conducted after the second presidential debate: Quinnipiac University/CBS News (October 17-20); Suffolk University (Oct. 18-21) and Fox News (Oct. 17-18). The Poll of Polls does not have a sampling error.

Both candidates have been campaigning heavily in Ohio, and have taken steps to increase turnout in the Buckeye State. Both Romney and Obama have also urged their supporters to cast their ballots early.

In the Suffolk University poll of Ohio, which was released Monday, a gender gap persisted for the two presidential candidates. Obama was ahead of Romney among women, 53%-41%, but Romney led among men, 52%-40%.

"All roads to 1600 Pennsylvania Avenue lead through Ohio," David Paleologos, director of the Suffolk University Political Research Center, wrote in a statement. "Timing is everything. Barack Obama has banked an early lead, but Mitt Romney should even the score with his slight edge among likely voters who plan to cast ballots on Election Day. However, failure to turn out his voters on November sixth could be costly for Romney."

Favorability-wise, the two candidates fared evenly: both were at 50% favorability ratings.

"These are high foreign policy expectations that the President must live up to in the final debate tonight," said Paleologos. "If he lives up to his billing, he could close the deal. However, failure to meet or exceed those expectations could open up the race for Romney."

The Suffolk University poll was conducted by telephone between October 18-21 from 600 likely Ohio voters. The sampling error was plus or minus 4 percentage points.