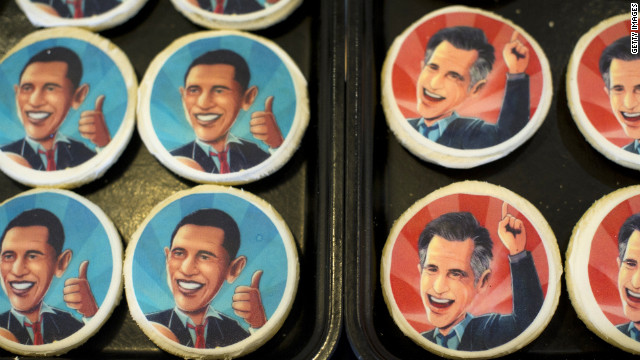 – Obama campaign officials now privately acknowledge that North Carolina, a state they can afford to lose, is moving perilously out of reach. Internal polling shows Florida also moving slightly toward Romney, but few in either camp believe the Republican nominee has more than a 1- or 2-percentage-point edge here.

– Both campaigns consider Virginia and Colorado tight, with Romney perhaps hanging on to a tiny shred of a lead. New Hampshire is now a jump ball. …

– The president's re-election chances increasingly hinge on a "Big Ten" firewall of Iowa, Wisconsin and, most importantly, Ohio - a state where Romney has been stymied by his opposition to the federal auto bailout and a concentrated effort by Obama forces to portray the former private equity whiz as out of touch with the middle class.

– KEY ADMISSION: One high-ranking Romney official, granted anonymity to speak frankly about campaign tactics, admitted that Michigan is probably off the table because Democrats "have done such a job of sticking a knife in us on the auto bailout." – Read Hamby's great, full story.

TRAIL TRIVIA
(Answer below)
What organization hosted presidential debates before 1988?

Boca Raton, Florida (CNN) – The third and final presidential debate proved to be a substantive, if not sharp, discussion on the major issues facing the nation as both candidates tried in earnest to persuade the small sliver of undecideds to vote for them.

Reflecting on the 90-minute matchup in Florida, here are Mark’s five takeaways:

The level of animosity between the two candidates was apparent but unlike last week, it was capped due in a large part to the debate format and setting. It is much more difficult to bring a level of personal anger to a boiling point while seated at a table.

2. It's the economy, stupid

4. America's role in the world

My favorite topic of the night: It is a question that allows a candidate to go big in his vision for the future.

Of course, each candidate took the opportunity to use it to talk in political terms, but not before offering these words of hope - Romney: "I absolutely believe that America has a responsibility and the privilege of helping defend freedom and promote the principles that make the world more peaceful." Obama: "America remains the one indispensable nation. And the world needs a strong America."

In the moments following the debate, Obama campaign manager Jim Messina was very clear about the political strategy in these final two weeks: "Persuading undecideds and turning out your vote."

By no means did Messina lift back the curtain and provide insight that we did not already know, but it goes to show you that politics is a very basic game - the person with the most votes wins.

Kevin Madden, Romney's spokesman, noted that in addition to Nevada and Colorado, the former governor will also make stops in Ohio and Iowa in the coming days and plans to visit multiple swing states in the same day as part of the effort to turn out the vote.

Leading CNNPolitics: Presidential politics: Why Ohio is the 'big one'
President Barack Obama and rival Mitt Romney have targeted Ohio with incessant campaigning, a slew of television ads and nonstop political phone calls. The importance of the Buckeye State cannot be overstated: Ohio has not voted for the loser in the presidential election since 1960. In other words, as goes Ohio, so goes the nation. – Wayne Drash

Leading HuffPo: Duck And Cover
President Barack Obama managed to escape Monday night's presidential debate on foreign policy without having to defend either his escalation of the war in Afghanistan or his unprecedented use of drones to attack suspected militants - including American citizens - in countries where the U.S. is not technically at war. – Dan Froomkin

Leading Politico: 2012: The battle for 7 states
The two presidential campaigns are sounding sharply different notes about how they can get to 270 electoral votes, but beneath the post-debate bravado from both sides there is a rough consensus about the shape of the race in its final two weeks. Top strategists for both Barack Obama and Mitt Romney flooded the media center following the third and final presidential debate here Monday night, and made clear they will be primarily fighting over seven states and will spend most of their time and money in them between now and Nov. 6. – Jonathan Martin

Leading The New York Times: A Final Push in Swing States, in a Bid to Break the Stalemate
President Obama and Mitt Romney embraced dueling imperatives as they began their sprint to the finish on Tuesday: trying to close the sale with moderate and undecided voters through high-minded appeals and a centrist tone even as they sought to energize their ideological bases and disqualify each other with a barrage of new attacks. – Michael D. Shear and Helene Cooper

- Biden, Ryan disagree about agreeing -
VICE PRESIDENT JOE BIDEN ON NBC: “It's fair to say that the debate has evaporated. Back when I was debating Congressman Ryan, there were these massive disagreements on everything about Syria, Libya, Egypt, etcetera. And now, it's like – I don't know – there was a conversion that took place here.”
REP. PAUL RYAN ON ABC: “I think this was a fantastic debate. I think Governor Romney won this debate. And you know why I think he won it? Americans for the third time got to see a man ready to become a great president. What they got from Mitt Romney, clear answers, a clear vision for foreign policy, clear distinctions on how we should go forward in this country. What we got from President Obama were mostly attacks on Mitt Romney. That’s not an agenda and we didn't get an agenda on how we should move our country forward on foreign policy.”

- With no more debates, it is now a two week chess match -
PRESIDENT BARACK OBAMA AT A CAMPAIGN EVENT IN FLORIDA: “In a world of new threats and profound challenges, America needs leadership that is strong and is steady. Governor Romney’s foreign policy has been wrong and reckless. Last night, he was all over the map. You know what I’m saying? During the debate he said he didn’t want more troops in Iraq but he was caught on video saying it was unthinkable not to leave 20,000 troops in Iraq – troops that would still be there today.”

- Hillary replacement auditions continue in earnest -
NICHOLAS BURNS, FORMER STATE DEPARTMENT OFFICIAL, ANALYZES THE DEBATE ON CNN’S STARTING POINT: “Governor Romney had been on the offensive over the last year, criticizing President Obama on Russia. Governor Romney said Russia was our Number One geopolitical foe. Last night, he backed off that statement. He’d been very critical about how President Obama ended the Iraq War and critical of the president's plans to bring the troops out (of Afghanistan) on a specific time line, 2014. And you saw none of that last night. In fact, Governor Romney appeared to leave a lot of his positions behind, and it does leave you with the question on what is his world view? What does he really believe?”

- More avian references – hooray! -
DAVID AXELROD, AN OBAMA CAMPAIGN SENIOR ADVISER, ON A CONFERENCE CALL WITH REPORTERS: “What was obvious and peculiar about the debate last night is that Governor Romney, in so many instances, said that he now agrees with the president's policies. If Big Bird was the symbol of the first debate, I think the parrot would be the symbol of this one.”

Romney against 2014 deadline in Afghanistan before he was for it
Obama went on an apology tour, Romney and others say
Comparing costs of Iraq, Libya missions
Romney, Obama and Iraq
Obama accuses Romney of criticizing his handling of China tire case
Is al Qaeda's core decimated or is group growing?

In 1988, the group’s trustee unanimously voted to stop organizing the debates because, according to a press release from its president at the time, Nancy M. Neuman, the campaigns wanted the debates to become “campaign-trail charades devoid of substance, spontaneity and answers to tough questions.”

“The League of Women Voters is withdrawing sponsorship of the presidential debates...because the demands of the two campaign organizations would perpetrate a fraud on the American voter,” read the statement. “It has become clear to us that the candidates' organizations aim to add debates to their list of campaign-trail charades devoid of substance, spontaneity and answers to tough questions. The League has no intention of becoming an accessory to the hoodwinking of the American public.”

The Commission on Presidential Debates began organizing the debates in 1988, when the Democratic and Republican parties established the organization for that specific purpose.

With all the 2012 debates now behind us, let the bidding begin – it is never too early for colleges and universities to try land a debate in 2016.