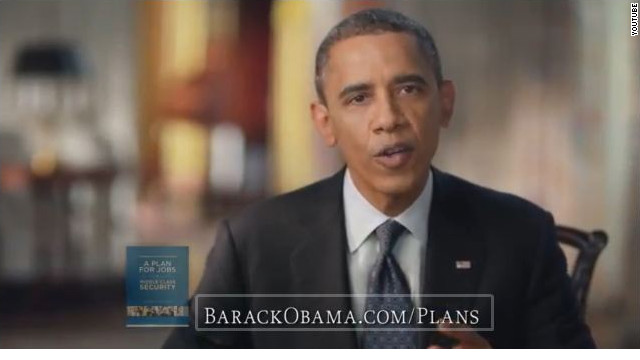 (CNN) - While he made a closing statement on Monday night's debate stage, President Barack Obama made another argument in a new 60-second television ad, released just hours after his final showdown with Republican nominee Mitt Romney.

In the spot, Obama looks directly at the camera and makes his case for another four years. The ad is part of what the campaign calls a "full-scale, multiplatform organizational effort" that includes direct mail and the distribution of a booklet that lists the president's four-year plan.

"There's just no quit in America, and you're seeing that right now," he says in the ad, touting recovered job number and a rise in exports as well as home values. He also highlights the auto industry comeback and the return of some U.S. troops from overseas.

But the president says there is more work to be done. "We're not there yet, but we've made real progress and the last thing we should do is turn back now."

He continues to outline his goals for a second term, including education and training reform, increased manufacturing, more domestic energy, deficit reduction, and ending the war in Afghanistan.

The new effort follows criticism that Obama has yet to lay out specifics for his next for years. The 19-page booklet that supplements the ad goes into detail of the president's accomplishments in his first term, but maintains the same level of specificity that he has mentioned before, according to a review of the printed plan.

The campaign plans to roll out 3.5 million printed copies of the glossy booklet, and 1.5 million copies will be sent to field offices for distribution. Obama, Vice President Joe Biden and campaign surrogates will hold up the plan at events and urge supporters to share the plan with other voters in the final two weeks of the race.

As for the new ad, the campaign said the commercial will run in the battleground states of New Hampshire, Virginia, North Carolina, Florida, Ohio, Wisconsin, Iowa, Nevada, and Colorado.

Mitt Romney's team responded to the ad campaign, saying the president's ideas are not "new."

“President Obama is offering no new ideas and his failed policies will lead to four more years just like the last four years," Romney spokeswoman Amanda Henneberg said in a statement. "The President is just doubling down on the same policies that have led to a stagnant economy, greater government dependency, and trillion dollar deficits. Mitt Romney has a Plan for a Stronger Middle Class that will create 12 million new jobs, lift people out of poverty, and deliver a real recovery to the American people.”

- CNN's Jessica Yellin and Kevin Bohn contributed to this report.