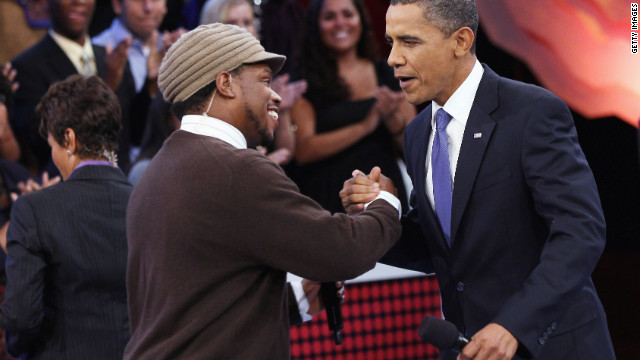 Obama to appear on MTV

Obama will participate in a live television program on MTV Friday, the television network said Tuesday, where he will field questions from young voters.

The president's appearance on MTV will come two days after he sits down with Jay Leno on "The Tonight Show," and just over a week after he sat in the sat in the hot seat on Comedy Central's "The Daily Show."

Obama will field questions from college students in Washington, D.C. and via Facebook, MTV said, in a conversation facilitated by the network's news correspondents.

"MTV's 'ASK OBAMA LIVE: an MTV Interview with the President' marks the first time in this campaign that either President Obama or Governor Romney have focused solely on young voter's top concerns - including jobs, the cost of college, rising student loan debt, social issues like LGBTQ rights, and immigration, to name a few - on a nationally televised program," MTV said in a statement. "MTV has invited Governor Romney to participate in a live, 30 minute special as well, and hopes to also conduct a sit down interview with him in advance of Election Day."