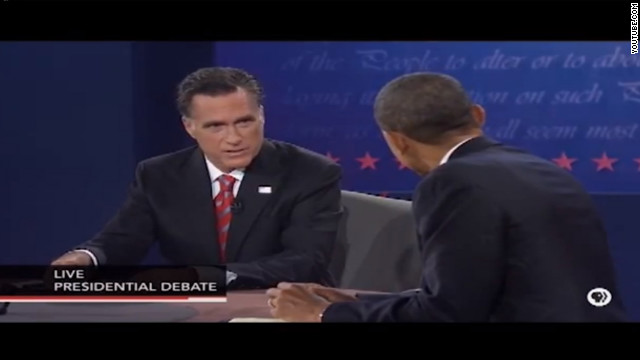 (CNN) - Mitt Romney's latest campaign ad is brought to you by the letters P, B, and S.

The Public Broadcasting Service, home to "Sesame Street" and Big Bird, had its moment in the first presidential debate. Now, PBS lives on in the Republican presidential candidate's advertisements, released on Tuesday.

Campaigns regularly "fair use" television footage in their advertisements, and sometimes the onscreen graphics give away the source of the clips. Such is the case in Romney's two spots released Tuesday morning, where the graphics of PBS and Boston's WGBH channel 2 - "PBS’s single largest producer of Web and TV content" - are clearly visible onscreen.

Romney has spoken out against federal funding for PBS on the campaign trail and at the first presidential debate, held October 3.

"I'm sorry, Jim, I'm going to stop the subsidy to PBS," he said to Jim Lehrer, who moderated the debate and anchors "PBS Newshour."

"I'm going to stop other things. I like PBS, I love Big Bird," he said. "Actually like you, too. But I'm not going to - I'm not going to keep on spending money on things to borrow money from China to pay for."

The comment went viral online and became a campaign trail talking point on both sides of the aisle.

And Obama has mentioned the "Big Bird" moment enough times that Romney has sought to turn it back on the president.

PBS is partially funded through the Corporation for Public Broadcasting, which receives about $450 million a year - a small portion of this year's $3.5 trillion federal government spending. "Sesame Street" is produced by Sesame Workshop, which says 93% of its costs are funded by corporate sponsors and licensing.

Other Romney campaign ads released this month have used debate footage aired by CNN and NBC.