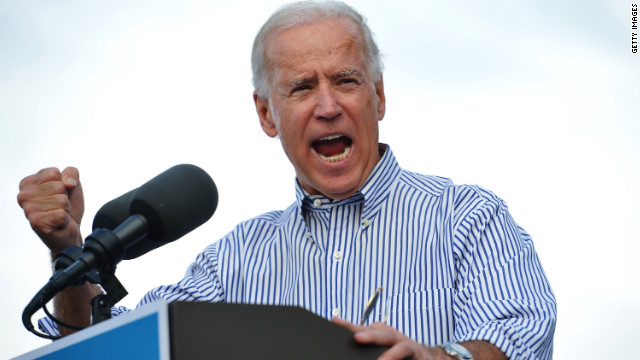 Biden quip: Romney 'not going to be elected'

Marion, Ohio (CNN) - Does Vice President Joe Biden know something no one else knows: the outcome of the election?

On Wednesday, the vice president joked as if he did, stating that Mitt Romney is "not going to be elected."

It came during a campaign event in Marion, Ohio, as a baby's piercing cries interrupted a stretch of audience silence during the vice president's speech.

"Look, I don't blame that baby for crying," Biden said. "You know what, she just realized what it means if Romney gets elected," he added, prompting laughter from his audience. It's a joke the vice president also made on Saturday in St. Augustine, Florida, as another baby wailed in the crowd.

Except this time, Biden added an apparent guarantee.

Candidates commonly express confidence at their electoral prospects. Both President Obama and Romney – the Republican presidential nominee - have repeatedly rallied supporters around versions of the line: "We're going to win this election."

What's not as common is for a candidate to expressly state that an opponent will lose.

As he's frequently claimed, Biden stated that Romney's proposals would eliminate Medicare, which services the elderly, and hurt Medicaid, a program for the poor.

Biden added: "Ronald Reagan couldn't even be their standard bearer this time based on what he did."

During Biden's only debate with Republican vice presidential nominee Rep. Paul Ryan, the two sparred over similarities between economic proposals enacted by the 40th president and those that Romney proposes.

The Romney campaign was swift in responding to Wednesday's charges from the president and vice president.

"Vice President Biden and President Obama showed again today that their campaign is getting smaller and smaller as Election Day approaches. With no plan to grow the middle class, Americans know another four years of Obama-Biden policies will mean more of the same: falling incomes, higher taxes, and more debt.," Romney spokesman Ryan Williams said in a statement.

Meanwhile, Biden leveled another quip at the GOP presidential nominee.

Early on during his speech, the vice president noted the various times Romney agreed with the president during Monday's third and final presidential debate.

"Half the time, in this last debate, I didn't know whether or not Gov. Romney was there to debate Barack Obama or endorse Barack Obama," Biden said, prompting laughter.