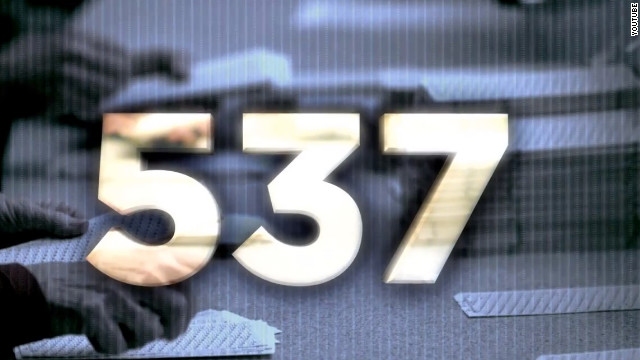 (CNN) – The razor thin 2000 Florida presidential vote is resurrected in the latest political ad from President Barack Obama's campaign, using the 537-vote deficit that ultimately put George W. Bush in the White House to encourage Democrats to get out and vote.

Another former president – Bill Clinton – is also appearing in a new ad from Obama's campaign, saying detractors of the president are similar to his own opponents from two decades ago.

In the first ad, a narrator harks back to the contentious 2000 Florida recount, with images of ballot inspectors analyzing those famous hanging chads.

"Five hundred thirty seven – the number of votes that changed the course of American history," the narrator says in the spot, which began airing in Tuesday in Boston media markets, which include the battleground state of New Hampshire, according to political ad tracker CMAG.

Over pictures of Bush – along with photos of foreclosure signs, worried looking traders, and U.S. troops – the narrator says those 537 votes made "the difference between what was, and what could have been."

He finishes by encouraging Obama supporters to avoid making a similar mistake in 2012.

"So this year, if you're thinking that your vote doesn't count, that it won't matter, well back then there were probably at least 537 people who felt the same way. Make your voice heard. Vote," the narrator says.

The latest ad is a sign of the ramped up turnout efforts from Obama's campaign, which will need states like New Hampshire in order to reach the 270 electoral votes required to win re-election. New Hampshire, for the past several months, seemed to be leaning toward Obama, but recent polls have shown the margin narrowing between the president and his rival Mitt Romney.

On the campaign trail and in debates, Obama has taken steps to lump Romney with Bush, who left office with an approval rating of 34%, according to Gallup. Polls also show many voters blame Bush, at least partially, for the country's current economic problems.

Asked how he was different from Bush during the second presidential debate, held last week, Romney said, "President Bush and I are different people, and these are different times."

Key to the difference, Romney said, was his focus on jobs.

"My priority is jobs," he said. "I know how to make that happen. And President Bush had a very different path for a very different time. My path is designed in getting small businesses to grow and hire people."

"The same people said my ideas would destroy jobs and they called me every name in the book," Clinton says, before touting his record of job creation and turning the federal deficit into a surplus.

"President Obama's got it right," Clinton says. The popular former president first appeared in an ad for Obama in August ahead of the Democratic National Convention.