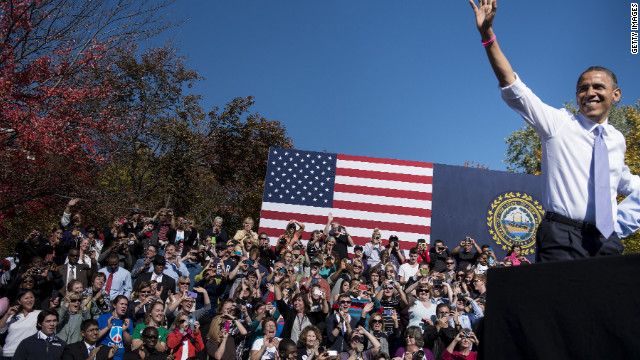 The interview was conducted Tuesday but made public Wednesday after the Obama campaign gave permission to the paper releasing them from their off-the-record agreement.

In the interview, Obama said he is confident his administration will pass immigration reform and achieve the equivalent of a grand bargain with Congress.

After failing to achieve comprehensive immigration reform in his first term, the president said Republicans, given the large Latino vote, will be invested in changing the system.

"I'm confident we'll get done next year is immigration reform," Obama said in the transcript of the interview posted online by the paper. "And since this is off the record, I will just be very blunt. Should I win a second term, a big reason I will win a second term is because the Republican nominee and the Republican Party have so alienated the fastest-growing demographic group in the country, the Latino community."

"So I am fairly confident that they're going to have a deep interest in getting that done," he added.

CNN has previously reported the White House met with a coalition of religious leaders in an effort to broach immigration reform next year.

He also predicted the two political parties reach an agreement over the fiscal health of the United States, buoyed by a combination of financial factors, including the Bush tax cuts expiring, the sequester and a commitment from himself and GOP presidential nominee Mitt Romney to reducing the deficit. Obama said he was "confident" about an agreement of $2.50 worth of cuts for every dollar of revenue.

$1.5 trillion in taxes will likely come from allowing the Bush tax cuts to expire, but $848 billion in savings will come from winding the wars in Afghanistan and Iraq, in addition to $1 trillion in cuts already agreed to in budget negotiations with Congress.

Reaching agreements on these topics in the first year of a second term, the president said, would allow a focus on "some things that really historically have not been ideological."

"We can start looking at a serious corporate tax reform agenda that's revenue-neutral but lowers rates and broadens the base," Obama said.

Romney campaign spokeswoman Amanda Henneberg said in a statement that if reelected, Obama supports "implementing even more job-destroying policies that will cost the nation over 700,000 jobs. It's clear why Americans can't afford four more years like the last four years."

Obama senior adviser David Plouffe said reaching an agreement is "the responsible thing to do."

"Obviously we want to get to work on this right after the election," Plouffe told reporters Wednesday.

The president emphasized the importance of Iowa during his visit Wednesday, telling the crowd he had to start his 48 hour "extravaganza."

"This is the first stop on our 48-hour fly around, campaign marathon extravaganza," Obama said. "We're going to pull an all-nighter. No sleep. We are starting here in Iowa."

Plouffe said "We win the election if it were held today," adding that the president has a "credible pathway to 50%" in North Carolina, Florida, Virginia, New Hampshire, Iowa, Colorado and Nevada.

"In the next 13 days Gov. Romney's got to pull voters off of the president so you know that's their task," Plouffe said. "We have to make sure voters turn out."