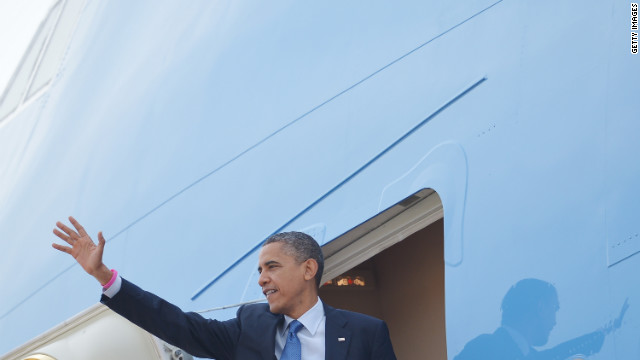 (CNN) – It's the kind of feverish schedule that is usually reserved for the final days of a presidential campaign: a two-day coast-to-coast swing that includes stops in eight states, multiple television interviews, and a redeye flight on Air Force One.

But President Obama isn't waiting for the last weekend of the campaign to up his pace to an all out sprint, a likely reflection of just how close he and his aides believe this race now stands with just under two weeks until Election Day.

"This is the first stop on our 48-hour fly around, campaign marathon extravaganza," a smiling Obama told supporters at his first stop in Davenport Iowa earlier Wednesday.

The uptick in the president's pace is especially noticeable to the reporters who cover him regularly because, until now, he has largely avoided multi-day campaign swings – opting instead to return to the comfort of the White House at the end of most days.

Jen Psaki, the Obama Campaign's traveling press secretary, said the new sprint is the result of having reached a "pivotal time in the election."

"People have started early voting; they're starting to early vote in places like Colorado, where we will be visiting today, this week," she said, adding that "[t]his has been a trip that has been in the works for weeks. It's something we've been very excited about for weeks."

"I think we're all going to be going on adrenaline for the next 36 hours or so. That's the fun of it. Nobody walk into oncoming traffic or into any glass-plated walls and we'll be good," she also said.

When all is said and by late Thursday night, the president will have touched down in the battleground states of Iowa, Colorado, Nevada, Florida, Ohio, and Virginia. He's also making a stop in Los Angeles to tape an interview with Jay Leno Wednesday night and will quickly visit Chicago Thursday to participate in early voting there.

"We are going to pull an all-nighter. No sleep," the president also said at the Davenport event.

But is the around-the-clock blitz earlier than needed with 13 days to go until the election?

"Well, what if we do a 98-hour tour the last week?" Psaki told reporters Wednesday morning.