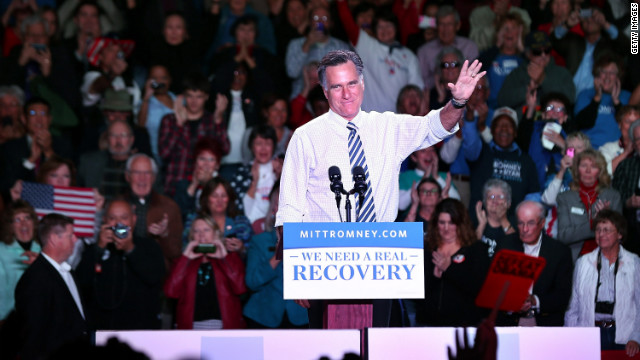 Romney: All in for the family

Reno, Nevada (CNN) - Mitt Romney made an appeal to struggling families at his second Nevada rally in as many days, telling voters he understood their troubles and could help.

The candidate's retooled stump speech, featuring a series of empathetic stories about down-on-their-luck Americans – a senior on Medicare, a daughter working to pay off her college loans, a middle-aged homeowner whose property lost value - came as the GOP presidential nominee sought to capitalize on a surge in the polls this month that has fueled new optimism about his election effort.

"This election [is] about your family and families across this country, and the choice we make will have an enormous impact on your family,"

Romney told an audience of roughly 2,500 people Wednesday in Reno – a smaller audience than the candidate had drawn at several joint rallies with his running mate Paul Ryan over the past week. "And I understand what it's going to take to get this country strong again and to provide the answers that your families need."

Romney's stop in Nevada underlined his renewed confidence following a series of debates with the president this month.

"We've had four debates and he hasn't been able to describe what his plan is to get this economy going," Romney said at a Reno events center across the state from where he spoke a day earlier. "You can boil what he's saying down to four simple words, and that is: 'more of the same.'"

President Obama enjoys support from Latinos and unions in Nevada, and has generally edged ahead of Romney in polls. But with two stops in two days and polls that show the race here is tightening, the Romney campaign is forcing Obama to defend a state he easily won in 2008.

The president will rally supporters in Las Vegas Wednesday night.

Hours in advance of that visit, Romney tied Obama to the housing crisis that has hit Nevada particularly hard.

"If he's re-elected I'm convinced you're going to see the values of your homes continue to bump along in the basement," Romney told supporters.