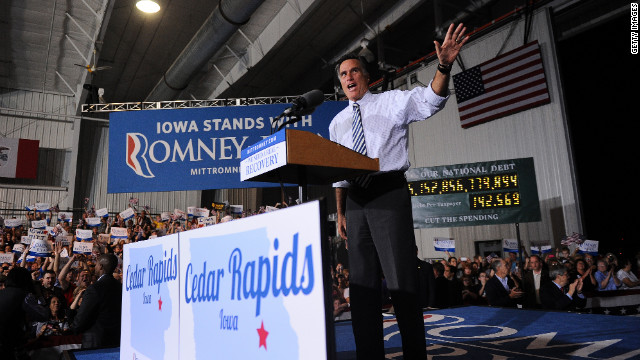 Cedar Rapids, Iowa (CNN) - With Election Day less than two weeks away and every minute meticulously scheduled, Mitt Romney's campaign stop in Iowa lasted a little over an hour.

He had landed in Cedar Rapids - his third of four states that day - for a quick stop with cheering supporters in an airport hangar about 30 paces from his campaign charter.

"The Obama campaign is slipping because it can't find an agenda to help the American families, but our campaign is growing into a movement across this country," he said enthusiastically to the audience of about 2,300 in Cedar Rapids.

"I'm optimistic. Not just about winning – we are going to win, by the way," he continued, as the audience burst into cheers and chanted his name.

Romney's confidence has only grown since his three debates with President Obama this month, and in recent stops in Nevada and Colorado, the Republican politician has cast his candidacy as riding a growing wave.

"You see the president's status quo campaign going forward with the same ideas as we've seen over the last four years - it's why he's slipping and it's why our campaign is gaining," Romney told an audience of more than 10,000 at Red Rocks Amphitheatre outside Denver on Tuesday night.

Now that his election effort has moved past debate season and the intensive fundraising schedule that dominated his time this fall, the Romney campaign is focusing on hitting key swing-state media markets, where the candidate appears with local politicians and delivers remarks lasting about 20 minutes.

This week, Romney will make stops in Ohio, Iowa, Colorado, Nevada, Florida and Virginia, according to local reports.

The emphasis on public speeches gives him little chance to be knocked off message by a reporter's question or an unscripted moment.

Romney has not sat for a television interview in more than a week, and a campaign spokesman would not say Tuesday whether the former governor of Massachusetts would grant a network news interview before the end of the campaign.

"Gov. Romney is looking forward to meeting with as many voters in these critical swing states and delivering them his closing argument about why he would be a better president," said senior adviser Kevin Madden. "I don't have anything for you on scheduling yet."

And as the campaign moved to blunt an effort by Democrats to tie Romney to an Indiana Senate candidate who prompted an uproar with his remarks about abortion after rape, traveling campaign spokespeople and senior aides made themselves scarce to reporters on the campaign charter Wednesday.