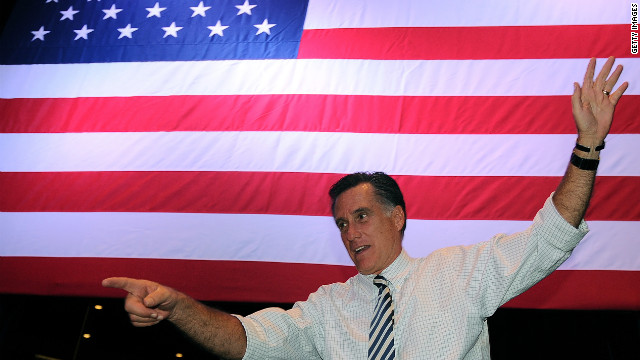 His speech will be delivered in Ames, Iowa, and is aimed at "reinforcing the big choice in November," a top campaign adviser told CNN.

A poll released Wednesday showed half of voters thought Romney would better handle the economy than President Barack Obama, 50% to 45%. The ABC News/Washington Post tracking poll included voters contacted both before and after the third presidential debate - between October 20-23 and had a sampling error of plus or minus 3 percentage points.

On Wednesday, Romney delivered a retooled stump speech, working in a series of empathetic stories about down-on-their-luck Americans, such as a senior on Medicare, a daughter working to pay off her college loans, and a middle-aged homeowner whose property lost value.

"This election [is] about your family and families across this country, and the choice we make will have an enormous impact on your family," he said.

At that rally in Reno, Nevada, Romney also underscored his argument that Obama is not advancing an economic plan.

"We've had four debates and he hasn't been able to describe what his plan is to get this economy going," the GOP candidate said. "You can boil what he's saying down to four simple words, and that is: 'more of the same.'"

Romney's economic speech comes on the same day he and running mate Paul Ryan will rally supporters in Ohio.