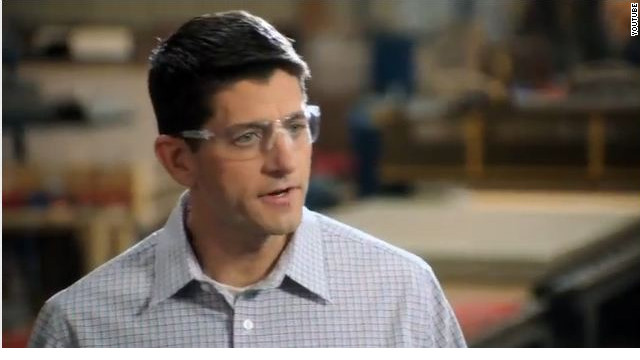 Ryan appears in ad–for his other campaign

(CNN) - Rep. Paul Ryan is once again donning a pair of safety goggles in a new television ad released Wednesday for his House re-election campaign.

Similar to his first television ad, Ryan is seen standing in a factory talking to voters about the economy.

One person asks the seven-term congressman from Wisconsin how he would fix the tax code. "It's a mess," the voter adds.

The House Budget Committee chairman responds in an answer that takes up the remaining time of the commercial.

"Hardworking taxpayers like you deserve a common sense tax code," he says. "Simple, fairer, and lower tax rates to make America more competitive. Fairer means eliminating loopholes and handouts that go to high income earners and the politically connected. Every American deserves the opportunity to achieve and succeed. America should be a place where if you work hard and play by the rules, you can get ahead. I'm Paul Ryan and I approve this message"

Ryan represents Wisconsin's 1st Congressional District, which is located in the southeastern part the state near Lake Michigan and includes parts of Milwaukee County.

The congressman is defending his seat against Democrat Rob Zerban, who argues Ryan has been largely absent from his district as he campaigns with Romney.

"I've been in this race for 19 months and since Paul Ryan was named as Mitt Romney's running mate he's been an absentee candidate. He's not been in the district. He barely comes into the state," Zerban told CNN nearly two weeks ago when the candidate came to the site of the vice presidential debate in Kentucky.

Wisconsin law allows Ryan to serve as his party's vice presidential nominee and also run at the same time for an eighth term in the House. If he wins both contests, he'll have to give up his House seat.

It was a similar situation four years ago when then Sen. Joe Biden of Delaware won re-election to his Senate seat and was part of the Democrats' winning ticket. Biden gave up his Senate seat to become vice president.

Ryan is set to deliver a policy speech on Wednesday at Cleveland State University in Ohio.