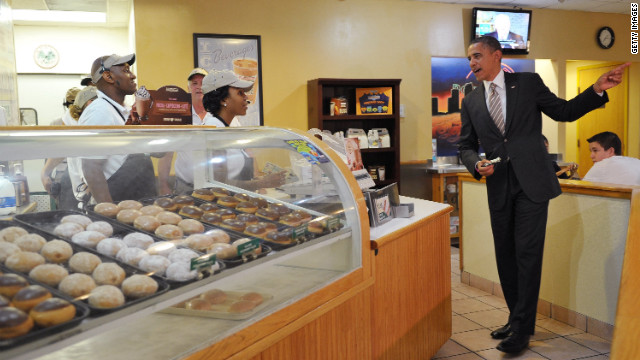 EDITOR'S NOTE: CNN has sent dozens of reporters, producers, contributors and correspondents to the key battleground states to cover the final days of the 2012 election. Here is a brief report from one team:

"My voice is getting a little hoarse, but I'm just going to keep on keeping on until every single person out there is going to vote," Obama told a crowd of 8,500 at a park in Tampa.

The president arrived in the battleground Sunshine State early Thursday morning after flying overnight from Las Vegas. Upon arrival he stopped for donuts at a Krispy Kreme and delivered a batch to firefighters thanking them for their service.

One firefighter challenged the president to a basketball game, to which Obama responded, "I don't want to embarrass you in front of the (press)."

The president is set to cast an early ballot later Thursday in Chicago, becoming the first commander in chief to vote for themselves ahead of Election Day. The trip to his home state is the latest effort to help spur early voting.

"We can vote early in Illinois just like you can vote in Florida," Obama said in Florida, where early voting begins Saturday.

He added: "I can't tell you who I am voting for. It's a secret ballot, but Michelle said she voted for me."