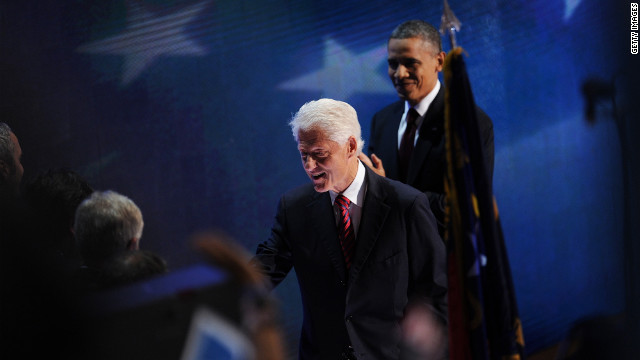 Clinton to campaign with Obama Monday

(CNN) - President Barack Obama is bringing out the big dog.

Clinton has been one of Obama's biggest surrogates this cycle, stumping for him on the campaign trail, appearing in ads for the president, and giving the high profile nominating address at the Democratic National Convention in Charlotte, North Carolina last month.

While they've appeared together at fund-raisers, and of course, their well-documented hug at the convention, Monday will mark the first time the two men will have teamed up at a campaign rally.

Florida, Ohio, and Virginia are arguably the three most important battleground states, with a combined 60 electoral votes at stake.

Speaking to reporters on a press charter from Florida to Virginia, White House communications director Dan Pfeiffer said it will be "helpful" to have Clinton on the trail with the president.

"To have the opportunity to go to three very important states you know eight days before an election is something that I think will be very helpful," Pfeiffer said. "Having them together I think will be a lot of fun and very impactful."