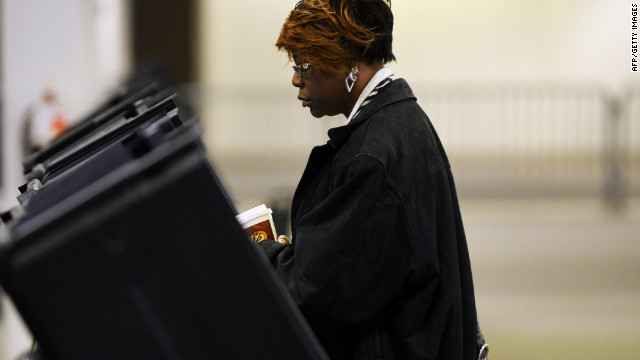 DEVELOPING... BATTLEGROUND VIRGINIA: Democratic Congressman Gerry Connolly tells CNN's John King, "A lot of people are focused on Ohio, but I really think it is just as conceivable that, frankly, the epicenter of this outcome is going to be right here in Virginia," Connolly said in an interview at a Obama campaign office in the heart of Prince William County. ... Republican pollster Whit Ayers tells King he likes the trend: "If you look at the dozen polls in Virginia taken before the first presidential debate on October 3, Obama was ahead in all 12," Ayres said in an interview as his office in Alexandria. "If you look at the eight polls taken after the first presidential debate, Romney was ahead in six of the eight. ... Clearly the momentum is going in Romney's direction. It is enough to win? We'll find out." VIDEO

WILD CARDS… Little-known candidates could harm Romney, Obama bids… Gary Johnson and Virgil Goode have no chance of winning the November 6 presidential election, but the two “third-party” candidates could have an impact on who does. Together, Johnson of the Libertarian Party and Goode of the Constitution Party are in position to siphon a few thousand votes from Republican Mitt Romney and perhaps President Barack Obama in some of the handful of battleground states considered up for grabs and therefore decisive in determining the winner. Goode, a former Democrat-turned-Republican congressman from Virginia known for an anti-immigration stance and other strongly conservative policies, routinely won well over 120,000 votes in his home district in elections from 1996 to 2008. … “Virgil Goode is a wild card, particularly in Virginia,” said Stuart Rothenberg of the Rothenberg Political Report, adding “he could be a factor even if he wins only a handful of votes.” – Tom Cohen

TRAIL TRIVIA
(Answer below)
On this day in history, the first Cabinet meeting was televised. During which administration did this take place?

With all the candidate energy on wooing women voters, we couldn’t help but be intrigued by this new Gallup study that says the current gender gap is actually being fueled mostly by men.

“Despite the great attention paid to the importance of the women's vote in the 2012 election, there has been a larger change in men's than in women's preferences compared with 2008,” Frank Newport writes on Gallup.com. Compared to 2008, “Barack Obama's support is down seven percentage points among men versus three points among women.” And now in the final days of the 2012 campaign, “Romney leads Obama by 14 points among men, whereas Obama and John McCain were tied among men in Gallup's final pre-election estimate in 2008. Obama currently leads Romney by eight percentage points among women, whereas he led McCain by 14 among women in 2008.”

Why does Romney have such a big lead with men? According to men surveyed in the swing states, the top issues of their concern were also the types of issues Romney did well in comparison with the president: jobs, the economy, the deficit, healthcare, and taxes.

Although this growth in Republican strength among men caught our eye, it won’t mean you will hear less about women voters. Why not? Because since 1980, the majority of voters who picked their presidential candidate a week before the election were women. Meaning: women voters are still up for grabs. And, in the last 12 election cycles, women have voted in greater percentages than men.

Nonetheless, this does shed light on why the gender gap is wider now than it was in 2008. The gender gap was 14 points in 2008 and is at 22 points now, according to Gallup. And for that, you can credit men.

Leading CNNPolitics: Could Obama's struggles with white voters cost him the election?
The nation's first black president could be in danger of becoming a "one-termer" if he can't convince enough white voters that he deserves another four years in the Oval Office. For weeks, he's hovered around 40% of white voter support – a level that Democratic presidential candidates have struggled with in the recent past and one that analysts believe Barack Obama must maintain in order to win. At the same time, he has to encourage minority voters to go to the polls and capture 80% of their support. – Halimah Abdullah

Gut Check Full Service... President Barack Obama responds to a kid’s positive comment relayed to him at the end of an interview with Rolling Stone:: “You know, kids have good instincts. They look at the other guy and say, ‘Well that's a bulls**ter, I can tell.’”

Kevin Madden, Romney Campaign senior adviser, in a written statement to the press: “President Obama is rattled and on the defensive. He's running on empty and has nothing left but attacks and insults. It's unfortunate he has to close the final days of the campaign this way.”

Leading HuffPo: Mitt Hit For 'Extremist' Ties
President Barack Obama's campaign on Thursday turned up the heat on Mitt Romney, pressuring him to do more than simply disagree with Indiana Senate candidate Richard Mourdock's comment Tuesday about abortion in the case of rape. In the campaign's final days, the Obama campaign wants to hold Romney's feet to the fire to clarify his position about one of the most explosive topics in politics, with potentially significant impact on one of the most valuable voting blocs still up for grabs in key swing states: women. – Jon Ward

Leading Politico: How Mitt Romney would govern
Mitt Romney’s transition team — dubbed the “Readiness Project” — has stepped up its activities as the nominee has surged in the polls, planning a series of modest but quick accomplishments should he win and bracing for the likelihood Romney would butt heads with House Republicans as he seeks a fiscal “grand bargain.” – Mike Allen and Jonathan Allen

Leading The New York Times: Nearly Absent in the Campaign: Climate Change
For all their disputes, President Obama and Mitt Romney agree that the world is warming and that humans are at least partly to blame. It remains wholly unclear what either of them plans to do about it. – John M. Broder

- Powell endorses Obama, faults Romney’s economic policy -
COLIN POWELL, FORMER SECRETARY OF STATE, IN AN INTERVIEW WITH CBS’ “This Morning”: “I voted for him in 2008 and I plan to stick with him in 2012 and will vote for him and Vice President Joe Biden next month. … With respect to Governor Romney, I have the utmost respect for him, but as I listen to what his proposals are, especially with respect to dealing with our most significant issue - the economy - it's essentially: let's cut taxes and compensate for that with other things. But that compensation does not cover all the cuts intended or the new expenses associated with defense.”

Gut Check Full Service… President Barack Obama responds to Powell’s endorsement at a campaign event in Virginia: “I was proud and humbled to learn that I have Colin Powell’s support in this campaign. I am grateful to him for his lifetime of service to his country both as a soldier and as a diplomat.”

- Romney: Obama has same old answers -
MITT ROMNEY AT A CAMPAIGN EVENT IN OHIO: “The path we are on has the average income of an American family down $4,300 per year over the president’s term. The path we are on does not have new answers. The president has the same old answers as in the past. He wants another stimulus. He wants to hire more government workers and he wants to raise taxes. There is no prospect whatsoever that that path will help our economy grow and put people to work and raise take home pay.”

- Paul Ryan, Destiny’s Child -
PAUL RYAN AT A CAMPAIGN EVENT IN VIRGINIA: “A hand full of states will determine this. What is this? This is the most important election in our lifetimes no matter what generation you come from. This is that kind of – we're not just picking a president for four more years. We are picking the destiny the trajectory, the path of this country for at least a generation.”

- Huntsman: Romney should have withdrawn his support for Mourdock -
FORMER PRESIDENTIAL CANDIDATE JON HUNTSMAN IN AN INTERVIEW WITH HUFFINGTON POST: “(If I were Romney) I simply would have said ‘I'm withdrawing my support.’ Until (Mourdock) proves otherwise, either you lay out an apology, do something else – but as of right now I would withdraw support.”

- Clinton implies possibility of staying at State in WSJ story -
AN EXCERPT OF THE WALL STREET JOURNAL STORY BY MONICA LANGLEY: “‘A lot of people have talked to me about staying,’ Mrs. Clinton said, declining to be more specific. When asked if current events will force her departure date to slip, she said it was “unlikely,” but for the first time left open that possibility for the short term.”

Gut Check Full Service… Press Secretary Jay Carney in a press gaggle on Air Force One: “She’s done an amazing job, in the President’s view, and has been an incredibly effective Secretary of State and advocate for America’s interests around the world. And I can’t say it better than the way the President said it last night in terms of his interest in having her stay if she could be persuaded. But I think today’s article notwithstanding, she’s largely indicated that she’s likely to not want to stay on.”

And this just in... Clinton spokesman Philippe Reines emails CNN the definition of unlikely – "not likely to be or occur; improbable; marked by doubt; holding little prospect of success; unpromising; likely to fail." He also gave CNN this statement: "She's been honored to serve as President Obama's Secretary of State, and has loved every minute of leading this Department and being part of the State family. But she's also been clear about her intention to leave after the first term. She merely meant that at such an important time she wants to ensure continuity, and realizes the confirmation of her successor might not exactly line up with January 22nd, 2013. But until her final day, she's full speed ahead."

Sunlight Foundation (@SunFoundation)
Your morning outside money report: $967.6 million spent as of 8:30 am ET. Will we reach the big $1B soon? http://snlg.ht/RY7DkC

Bloomberg News (@BloombergNews)
Lance Armstrong may lose as much as $200 million in future earnings due to his doping scandal | http://bloom.bg/SA52hq

President Dwight D. Eisenhower, on October 25, 1954, allowed one of his Cabinet meetings to be televised. It was a briefing by Secretary of State John Foster Dulles.

“For this one time, we are having this meeting of the Cabinet on all of these mediums of publicity,” said Eisenhower at the top of the meeting.

Eisenhower was correct – this was both the first and the last time that an entire Cabinet meeting has been broadcast.