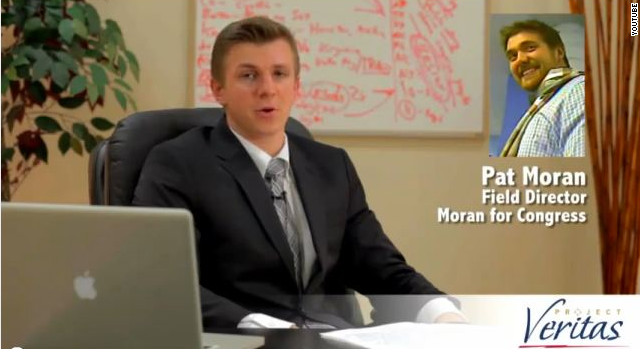 The congressman's son, Patrick, resigned from his position Wednesday as a paid staff member on his father's re-election campaign after secretly-recorded video showed him giving detailed advice on how to commit voter fraud.

Moran, now in his 11th term, released a statement saying his son, Patrick, was "a well-respected member of the campaign team. This incident, however, was clearly an error in judgment. The campaign has accepted Patrick's resignation, effective immediately."

The video, which first emerged Wednesday, was released by Project Veritas, a 501(C)3 group created by conservative activist James O'Keefe. O'Keefe is known for using fake aliases and secretly record videos to try to expose fraud.

In the edited video, an undercover Project Veritas employee with a hidden camera approaches Patrick Moran, asking for advice on how to vote for 100 people.

Though remaining skeptical, Patrick Moran suggests forging utility bills or bank statements as forms of ID, as well as pretending to be a pollster in order to call voters and find out if they are inactive.

"The Arlington County Police Department has initiated a criminal investigation of this matter," the statement read.

After the video made headlines, Patrick Moran released a statement Wednesday, saying he does not endorse "any sort of illegal or unethical behavior."

"At no point did I take this person seriously. He struck me as being unstable and joking, and for only that reason did I humor him," he said. "In hindsight, I should have immediately walked away, making it clear that there is no place in the electoral process for even the suggestion of illegal behavior: joking or not."