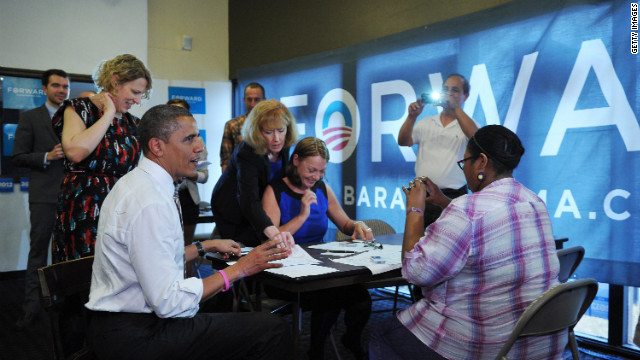 (CNN) - President Barack Obama's re-election effort brought in $90.5 million in the first part of October, lower than the nearly $112 million raised by his rival Mitt Romney during the same period.

Obama's team made the announcement on the president's official Twitter page. They also noted the new haul came from more than 1.2 million donors, with more than 200,000 who had never before contributed to the Democratic effort.

The figures were for the period between October 1 and October 17 – a period that includes the first and second presidential debates, as well as the vice presidential debate held between Vice President Joe Biden and Rep. Paul Ryan. Most viewed Romney as the clear winner of the first debate, held October 3 in Denver. The second town-hall style debate was generally regarded as a draw between the two candidates.

Obama's monthly fund-raising figures include money donated to his campaign, as well as the Democratic National Committee and affiliated state parties. The latest numbers do not include fund-raising that occurred around the final presidential debate on Monday.

Romney's campaign announced they held their final fund-raiser for the cycle on Saturday, shifting focus toward public rallies in the final two weeks of the race. In total, the former Massachusetts governor has raised more than $361.3 million this cycle, Federal Election Commission records through the end of September show.

His running mate, Rep. Paul Ryan, however, continues to attend fund-raisers this week.