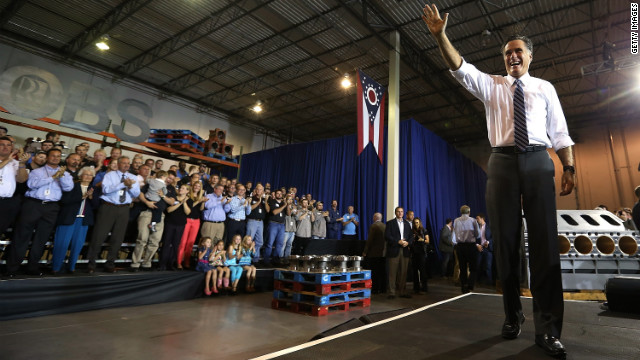 "We need to make sure Ohio is able to send a message loud and clear: We want real change. We want big change," Romney told 3,000 cheering supporters in Cincinnati, the first stop on the GOP presidential nominee's bus tour through the Buckeye State.

The White House hopeful, who in recent days has cast his bid as a growing "movement" of enthusiasm, said he was equal to confronting the "huge challenges" the country faces.

"The Obama campaign is slipping because he's talking about smaller and smaller things despite the fact that America has such huge challenges and that this is such an opportunity for America," he said. "And that's why on November 6th I'm counting on Ohio to vote for big change!"

Romney planned stops in three Ohio Thursday, and after a quick trip to Iowa Friday morning for a policy speech on the economy, he will reunite with his running mate Paul Ryan in North Canton that evening.

A Time Magazine poll released Wednesday showed Obama holding a five-point edge in Ohio, which holds 18 electoral votes and is the site of the fiercest battles between Romney and the president.

While Romney barnstormed the state, his campaign sent reporters a statistics-heavy memo arguing Romney was actually better positioned in Ohio than Obama, who has consistently led polls here. The memo detailed the Romney campaign's voter outreach and ground operations in the state, and said the former Massachusetts governor was poised to sway more independent voters than Obama by Election Day.

"Write it down – if Mitt Romney wins independent voters by 15 points in Ohio, he'll be the next President of the United States," wrote Romney Political Director Rich Beeson.

In response to Romney's morning comments, the Obama campaign again sought to tie their opponent to controversial members of the Republican Party.

"Here's the 'big change' Mitt Romney is offering: going back to the same failed policies that caused the economic crisis and empowering the extreme voices in his party like Richard Mourdock," said spokeswoman Lis Smith.

At a breakfast stop Thursday morning Romney ignored reporters' questions about his continued support for Mourdock, who earlier in the week said even pregnancies caused by rape were intended by God. The Romney campaign distanced itself from those comments through a spokeswoman.