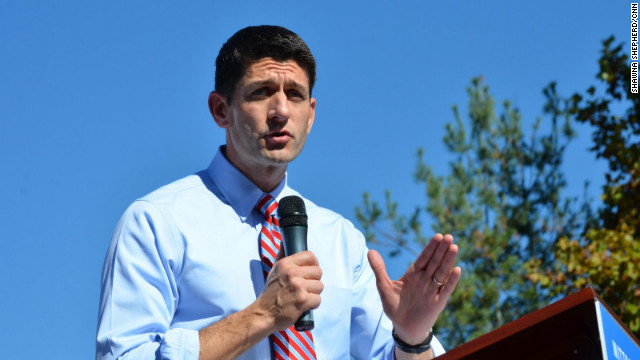 "You know President Obama hasn't really given us a vision for a second term agenda," he said. "Just a couple of days ago he came up with a slick new brochure. You know, with less than two weeks left to say, 'Oh I do actually have an agenda.'"

As Ryan continued to mock the plan a man in the crowd interjected with his own description.

"It is a slick – well, comic book, that was his word – to me a slick re-packaging of more of the same," Ryan said.

On Tuesday, Obama's re-election team released 19 pages outlining the plans he hopes to institute if he wins a second term in office and an accompanying television ad set to air in nine battleground states. The booklet is largely a rehash of policies previously proposed, but is a response to critics who have charged the president with offering few specifics on his second term agenda.

When Ryan hammered the president on the economy he did not mention the nation's unemployment rate dipped below 8% last month for the first time in 42 months but instead pointed to slow job growth.

In the heart of Virginia coal country the Wisconsin lawmaker and vice presidential hopeful called attention to people in the audience who were wearing blue hats that said "COAL JOBS" when he delivered his pitch on energy.

"I see all these coal hats out here," Ryan said. "We in Wisconsin we use coal, it keeps our electricity rates down, it keeps our businesses operating. You produce coal, it keeps good families supporting wages and jobs and this war on coal is going to end when we elect Mitt Romney the next President of the United States, I can guarantee you that."