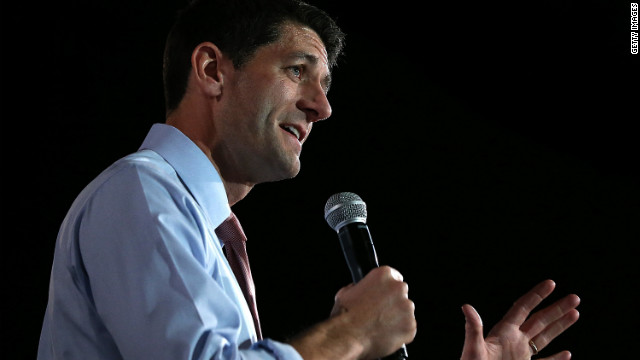 Ryan to campaign and trick-or-treat in Wisconsin

Cleveland, Ohio (CNN) - In a week Paul Ryan will campaign in the battleground state of Wisconsin but the visit was partially designed so the GOP vice presidential nominee can be with his kids on Halloween.

Ryan made it clear he won't miss being with his kids on the dress-up holiday in a radio interview earlier this month.

The seven-term congressman, wife Janna and three children live on the same block that Ryan grew up on in Janesville.

"I'm taking my kids trick-or-treating, and so, that's a big tradition we have in my neighborhood. We trick-or-treat at the same houses I trick-or-treated in as a kid growing up," Ryan said in a radio interview on the Jerry Bader Show on Oct. 19. "And so, around that time, I'm going to spend a good deal of time in Wisconsin."

The race in Wisconsin is considered a "toss up" on CNN's Electoral Map. The state took on greater importance after Ryan became Mitt Romney's running mate and recent polls show President Barack Obama still has a slight edge in Ryan's home state.

In the same interview that aired on WTAQ in Green Bay he said, "I'm planning a swing through the state and throughout the major cities, as many as I can get."

A Ryan aide confirmed the Halloween-day visit but would not elaborate what stops he will make or how long the visit will be.

Ryan's children are school-aged – Liza is 10, Charlie is 9 and Sam is 7 – so they are not able to spend much time with their dad on the campaign trail. Prior to last weekend Ryan was able to take one day off the trail and spend Sundays at home.

When his immediate family is not traveling with him usually another member of the family is by his side, either one of his two brothers, Tobin or Stan, and mother Betty Ryan Douglas joins him occasionally.

His wife and children have appeared with him on some weekends and around big events, including his speech at the Republican National Convention in late August and the vice presidential debate in Danville, Kentucky earlier this month.

When they joined him on a swing through Ohio the day after the debate on Oct. 12, 7-year-old Sam paid an impromptu visit to reporters in the back of the plane.

Perhaps Michael Steel, his dad's press secretary, had given him a few tips about how to take questions and communicate with the press. What was he going to be for Halloween? "It's a secret," Sam responded and then said he dressed up as Super Mario last year.

Sam engaged in a campaign plane tradition of "orange bowling." He rolled down the aisle an orange with the message, "Happy Halloween. From me and my dad."

Reporters returned the orange with a message intended for the vice presidential hopeful. "Come back for a chat. You can bring Sam."

The clever response was "Have candy?"

A photo of Sam talking to reporters was tweeted from his dad's official campaign Twitter account with the message, "Campaign spokesman in training, my youngest son Sam."

On Halloween Sam will probably want to dress up as something else.