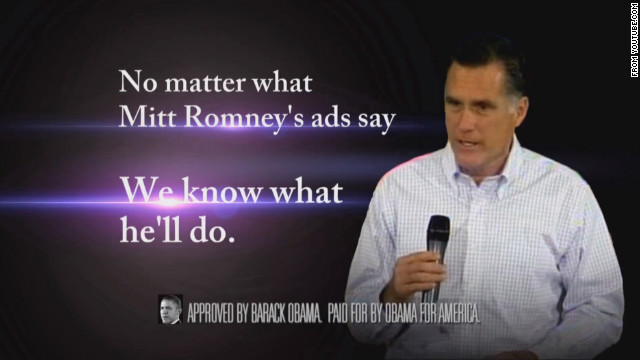 Both campaigns have produced ads in the past two weeks sparring over Romney's position on abortion and Planned Parenthood, with Obama's spots highlighting Romney's anti-abortion positions.

"Which do you believe: what Mitt Romney's TV ads say about women, or what Romney himself says?" the narrator asks in the latest ad.

What follows is a series of clips of Romney saying he supports a "reverse of Roe v. Wade," which affirmed a woman's right to have an abortion. In another clip, he says, "I will cut off funding to Planned Parenthood."

The narrator in Obama's latest spot says, "No matter what Mitt Romney's ads say, we know what he'll do."

The Obama campaign did not announce this spot, as the campaigns typically do, but the Campaign Media Analysis Group, CNN's ad tracking consultant, said it aired in several Florida and Virginia markets. The recent volley of abortion ads has been focused in Virginia, according to CMAG data. Video of the latest spot was uploaded to Obama's YouTube page on Thursday.

- CNN's Peter Hamby and Gregory Wallace contributed to this report