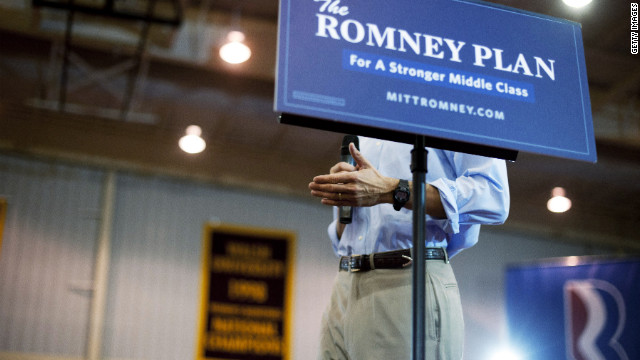 (CNN) - Early results are in and Mitt Romney finds himself ahead of his competition in North Canton Ohio.

The opponent in this race though – is high school football

Not only is Romney battling President Barack Obama in a tightly contested presidential race, Friday, in Ohio, Romney finds himself competing against one of the most beloved teams in town: the North Canton Hoover football Vikings.

When the Romney campaign bus pulls into North Canton Hoover High School Friday for a 7 p.m. ET campaign rally, the football team, fans, and general school population will be on the road for match-up against their cross-town rival the Jackson Township Polar Bears.

A win for the Vikings means a shot at the playoffs. And with local media headlines reading "Hoover headed in the right direction" and "Jackson looking for revenge against Hoover" the message is clear – this is a big game.

With Romney in a big game himself, does the lure of the high school football game mean the possibility that the Republican nominee will greet a small turnout?

Not so, says Morgan Day, a local editor for northcantonpatch.com. Day, took the dilemma to the people–and Friday morning asked readers to vote in an unscientific, informal online poll:

"Where will you spend your Friday night?"

According to Day, so far, Romney is the victor.

"We started the poll to see if people would bite and to see what the Friday night was shaping up like. Early results from Patch readers have most going to the rally instead of the high school football game."

In this part of Ohio, that's no small victory. There's a real football history in Canton, Ohio. It's the birthplace of professional football; it's home to the National Football League's Pro Football Hall of Fame; and each year the city of Canton hosts the Ohio High School Athletic Association State football championship games.

At the same time, this same part of the state has a rich political history. Before becoming president, William McKinley practiced law in Canton. Today, the town houses the William McKinley National Memorial and McKinley Presidential Library and Museum.

Day says people are excited to see the politicians in their home town, but there are families who would never miss a high school football game, especially one where a playoff berth is at stake. "I think this puts some in a real pickle," she says

Still, Day says residents want to see the politicians "in the flesh" and don't want to pass it up. She says this is the second big campaign event in North Canton. Paul Ryan was at Walsh University in North Canton in August. From Day's perspective, "people are really feeling honored having the Romney/Ryan ticket in town"

Day herself says she is going to Romney event but understands the excitement being generated elsewhere.

"It's going to be a pretty exciting game," she says