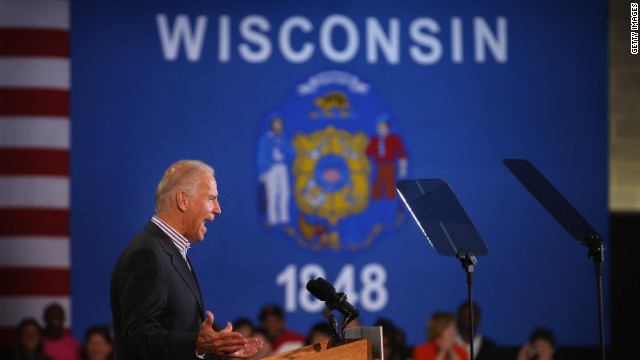 During a campaign event in Kenosha, Wisconsin, the vice president repeated a line being pushed by the Obama campaign against the Republican presidential nominee and his running mate: that the two are on the wrong side of women's issues.

"You know, as hard as they try, our friends cannot run from their record," Biden said.

In the next breath, Biden waded into the controversies surrounding Mourdock and Akin.

"And here's the truth: they've made it very, very clear…that they do not believe a woman has a right to control her own body. They can't even get up the gumption to condemn the statements made by two of their candidates for United States Senate," Biden said without specifically naming the Republican ticket.

"It's not enough to tell me you don't agree. It's having the moral courage to stand up and say what they said was wrong, simply wrong."

Romney has endorsed Mourdock's bid, the only Senate candidate he's backed this cycle. And, just before the controversy, Mourdock's campaign began running an ad featuring Romney praising the candidate.

After Mourdock's comment on rape, Romney released a statement through a spokeswoman, saying that he did not agree with Mourdock's words. But the campaign has not urged Mourdock to pull the ad.

Some have called on Romney to pull his endorsement of Mourdock altogether.

All of this stems from Mourdock's statement about believing that abortion should not be a permitted exception for rape victims in a Tuesday debate with opponent, Democratic Rep. Joe Donnelly.

"I struggled with it myself for a long time, but I came to realize life is a gift from God, and I think even when life begins in that horrible situation of rape, that it is something that God intended to happen," said Mourdock, currently Indiana's state treasurer.

Facing a storm of criticism, Mourdock - the next day – expressed remorse if his words offended anyone.

As for Akin, the Missouri candidate said, two months ago, that "legitimate rape" rarely results in pregnancy. In that case, Romney and other Republicans urged Akin to end his senate bid – something Akin refused to do.