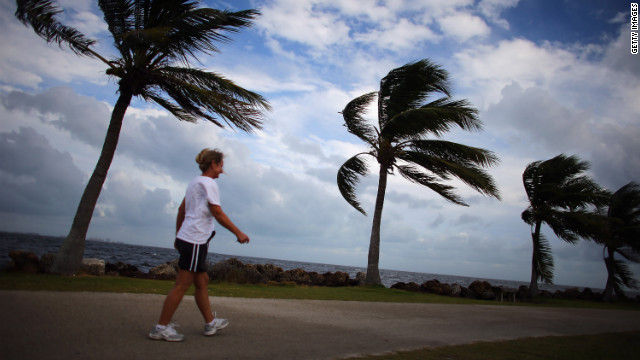 (CNN) – The potential "superstorm" that's currently projected to make landfall on the East Coast as soon as Monday is already having ramifications on the campaign trail, and could pose new, unexpected challenges to the candidates in the final sprint toward Election Day.

Mitt Romney's campaign has already canceled a Sunday evening event in Virginia Beach, citing the forecast showing outer bands of Hurricane Sandy beginning to throw rain on the region this weekend. A Joe Biden event slated to take place in the same city on Saturday was similarly canceled, as was an event featuring first lady Michelle Obama that was scheduled for Tuesday at the University of New Hampshire.

“We're monitoring the situation and have contingency plans. Obviously people’s safety is our number one concern," a campaign official for Romney said.

Obama's team is "closely monitoring the storm and will take all necessary precautions to make sure our staff and volunteers are safe," according to campaign spokesman Adam Fetcher.

"Our historic grassroots organization continues to run at full speed in Eastern battleground states to persuade undecided voters and get our supporters out to the polls between now and Election Day," Fetcher said.

The U.S. target area for the storm is hard to predict at this point. Some landfall computer models show the storm striking somewhere between Washington and Boston - some of the most densely populated areas of the country.

Worst case, Sandy could merge with a strong cold front from the west. The double threat could morph into a "superstorm" that could sit over New England for days, making untold trouble for millions of residents.

The campaigns have already begun mapping out their travel plans next week, an intricate calculus for organizations focused on nabbing the 270 electoral votes needed to win the presidency.

On Monday Obama is scheduled to head to Ohio, Florida and Virginia with former President Bill Clinton, returning to Washington in the evening. Those events were still on, as of Friday afternoon.

Teams of staffers and volunteers are also poised for final stretch get-out-the-vote plans in the key states, efforts that usually involve walking door to door to reach undecided voters. Those efforts would similarly be impacted by severe weather.

In Virginia, the effects of a major storm could linger until Election Day. Hundreds of thousands of customers in Northern Virginia lost power for more than week following Hurricane Irene in August 2011, and clean up efforts could be prioritized over making the trip to the polls. Virginia offers early absentee voting only with an excuse, unlike other states which offer less restrictive ways to cast ballots before November 6. That means the race in the commonwealth will be won or lost on Election Day.

North Carolina and Maryland, two other states in the storm's projected path, offer in-person early voting, which has benefited Democrats in the past. Martin O'Malley, Maryland's Democratic governor, said Friday that early voting in his state could be affected by the storm.

In Delaware, New York, Massachusetts, Connecticut, and Rhode Island, residents only have the option of voting early by mail.

While Obama and Romney have a host of battlegrounds states to visit that are out of the storm's path – including Colorado, Iowa and Ohio – the consequences of a major storm would echo beyond mere logistics. A hurricane hitting the most densely populated section of the country would also suck media coverage from the campaign, as television networks and newspapers deploy resources to cover weather rather than politics.

It could also provide a contrast between the two candidates – one who is a sitting president, and one who wants to become one.

A strong leadership image of Obama making official tours of affected areas could boost his image in the eyes of voters; conversely, any missteps in the administration's response to the potential disaster could have damaging results.

Romney also faces opportunities and pitfalls. His response, like Obama's, will be closely monitored and evaluated for its tone. Rivals will be ready to pounce at any sign of politicization, while the candidate will also be able to bolster his image of a leader by making visits to damaged areas.

Romney made such a visit to New Orleans following Hurricane Isaac, the storm that forced organizers to cancel the first day of the Republican convention in August. That visit didn't generate any negative headlines for the candidate.