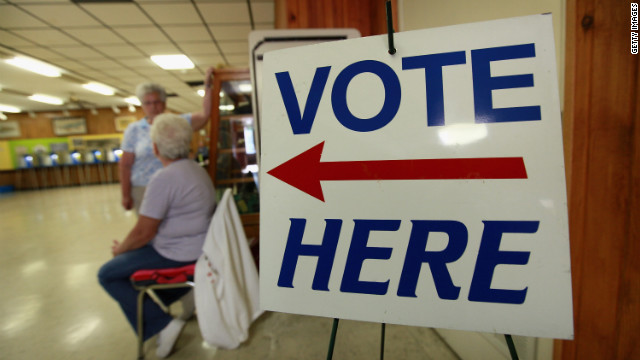 Washington (CNN) – In blog posts, conference calls and dueling press releases, both presidential campaigns are locked in a flame war over who has the edge in early voting.

The Obama campaign says its sophisticated field operation is running up the score before Election Day and bringing new voters into the fold. Romney forces, counting on Republican grassroots enthusiasm and a re-tooled ground game, say they've narrowed the early voting gap since 2008.

Officials in both parties concede that President Obama is all but certain to win the early vote in key states like Ohio and Iowa.

But it's still difficult to tell who's actually voting for whom in the early and absentee vote, because the clues we have derive mostly from voter registration data. And registration data alone can only reveal so much about voting behavior.

In North Carolina, for instance, registered Democrats are out-voting registered Republicans by a 2-1 margin. The Obama campaign says that 72% of North Carolina early voters are women, youth, African-American or Latino. That's good news for Obama.

But like famed basketball coach Dean Smith and the soft drink Cheerwine, a Democratic advantage in voter registration is a North Carolina tradition. There have been more registered Democrats than Republicans in North Carolina for generations – the late, firebrand conservative Jesse Helms was a Democrat until 1970 - but Tar Heel Democrats have a knack for voting GOP on the federal level.

In Ohio, Republicans say the number of GOP ballots cast in early voting is outpacing their voter registration across the state. A sure sign of Romney enthusiasm, perhaps. Until you examine the confusing nature of voter registration in Ohio.

People don't just check a box to side with one party or the other. Instead, party registration is determined by the most recent partisan primary one participated in.

Ohio Democrats haven't had a big statewide primary in years. Republicans had one in March. There's also a big chunk of unaffiliated voters who are hard to peg as Republican or Democrat.

This is where micro-targeting comes in.

Both campaigns are using the data mining technique to identify and turn out their supporters, but the numbers they're using to develop a turnout model are tightly held by operatives in Chicago and Boston.

The process of using commercial and consumer data to tag and persuade potential supporters was by pioneered by George W. Bush advisers in 2000 and honed during his 2004 re-election.

People were targeted not just on the basis of their zip codes or past voting history, but according to which magazines they subscribed to, or whether they owned a gun, or what kind of car they owned. Using algorithms, Bush strategists were able to comb through a vast quantity of data in order to tailor their messages down to the neighborhood, even household, level.

Democrats were caught flat-footed in the data-mining game but began catching up in 2006.

Today, Catalist, a progressive, for-profit vendor that refines and sells data on over 280 million voters to scores of liberal groups like the AFL-CIO and Planned Parenthood, is one of the Democratic coalition's secret weapons.

Even Republican svengali Karl Rove admitted to the journalist Sasha Issenberg earlier this year that the Catalist model - housing much of the party's voter data in the hands of a private entity rather than a campaign committee, so it can be shared across the liberal spectrum - has helped Democrats "move ahead" of Republicans in the data mining game.

Catalist looks beyond voter registration and examines over 300 different variables culled from commercial data and their clients' canvassing efforts to develop a score – "a partisanship model" – for every voter in their database. The higher the score, the more likely it is that person will vote Democrat.

Analysts at the company, co-founded by longtime Bill Clinton hand Harold Ickes and veteran Democratic strategist Laura Quinn, have been examining the early voting numbers in key states and say the returns give an edge to the president.

The company worked with the Obama campaign in 2008 but is not doing so directly in 2012. But they are tracking early voting based on their modeling of who is a likely Democrat and who is a likely Republican.

In Ohio through Wednesday evening, according to their models, Catalist says that 50% of those who have requested absentee ballots are Democrats, while 36% are Republicans. And 55% of voters who have returned ballots can be safely identified as Democrats. Only 34% are Republicans.

The company's models also show that in blue collar Ohio communities, likely Democrats are making up nearly 60% of the early electorate.

Republicans say Democratic leads in early and absentee voting suggest the Obama camp is only turning out their most loyal backers, and that the president's support will fall off on Election Day.

Obama campaign officials counter by saying they have identified and registered thousands of new voters in the battleground states and their strong early turnout operation is only a sign of things to come.

"Nobody is claiming that this is going to prove the outcome, but it does show that we think our ground operation is working," Ickes told CNN in an interview at Catalist headquarters in Washington. "Our voter contact, our voter ID and actually getting these people to ask for a ballot and actually vote and return it. The numbers show a dramatic disparity between what we think are Republicans, and we think are Democrats."

In Virginia and Colorado, two traditionally-Republican states that Obama flipped in 2008, Catalist models show likely Democrats and Republicans running roughly even in the early vote.

But in Virginia they show that unmarried women – a constituency that should favor the president – account for 30% of absentee ballot requests. According to Catalist models, 60% of those single women requesting absentee ballots can safely be identified as Democrats.

Ultimately, thanks to a little thing called the secret ballot, nobody knows exactly which candidate these likely Democrats and likely Republicans are voting for.

The campaigns are reluctant to share their own micro-targeting scores with reporters, although a Republican National Committee official told CNN last week that their modeling showed likely Republicans leading likely Democrats by a five-point margin among unaffiliated voters in Ohio. That number was quickly disputed by Obama officials.

But micro-targeting is driving each campaign's assessments of who their voters are, and the Catalist data offers some hints as to what the shape of the early vote electorate actually looks like.

"This is based on modeling of who is a Democrat and who is a Republican that we've been doing for well over five years, and we think its pretty damn close," Ickes told CNN. "We think it's very accurate."