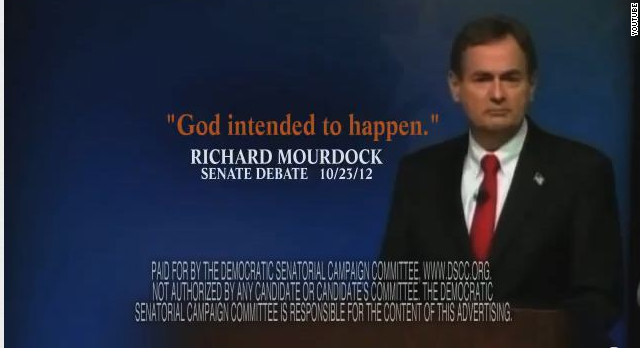 (CNN) - While Republicans may hope the issue goes away, Indiana voters can count on hearing about Richard Mourdock's recent rape comments until Election Day.

The Democratic Senatorial Campaign Committee on Friday said it took out a $1.1 million ad buy on a new commercial in Indiana that blasts the GOP Senate candidate for his controversial remarks. The ad will run on television until November 6.

Mourdock has faced fierce pushback from the left and some on the right after saying in a debate this week that if a woman gets pregnant during rape, then "God intended that to happen."

He added that he would allow for exceptions to an abortion ban when a mother's life was in danger.

"God intended that women be raped and become pregnant?" a female narrator asks in the new DSCC ad. "Even Mitt Romney and (Rep.) Mike Pence believe Richard Mourdock goes too far and should apologize, but not Mourdock."

Mourdock said he was sorry that people had misinterpreted his comments at a news conference earlier Wednesday, but stuck by the crux of his argument that abortions should not be allowed in cases or rape or incest.

"I'm a much more humble person this morning because so many people mistook, twisted, came to misunderstand the points that I was trying to make," Mourdock said.

While many Republicans have stood by Mourdock, saying his comments reflected a widely-held view that children are a gift, Democrats have seized on the remarks as a way to frame the candidate as a threat to women's health issues.

Mourdock is running in a highly contested Senate race against Democratic Rep. Joe Donnelly. And with Republicans aiming to retake the Senate majority, the contest has quickly become one that could upset their goal.

President Barack Obama's re-election campaign has also used the incident to paint Republicans, including GOP presidential nominee Mitt Romney, as anti-women. The campaign launched a new website Friday, linking Romney with Mourdock and calling for Romney to renounce his endorsement of the Senate candidate.

Romney's campaign, earlier this week, released a statement saying the former Massachusetts governor "disagrees with Richard Mourdock" and his comments "do not reflect Gov. Romney's views."

And a super PAC with the the fiscal conservative group Club for Growth announced on Friday it expanded an existing TV ad buy and has now exceeded $3.5 million in spending on the Indiana Senate race.