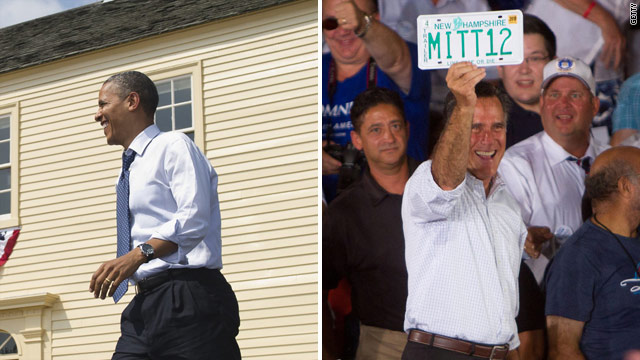 (CNN) – New Hampshire's four electoral votes are turning into one of the presidential election's most fiercely fought-for prizes, with both candidates headed to the state next week and top surrogates streaming in to try and sway the notoriously independent voters there.

President Barack Obama heads to New Hampshire Saturday for a rally in Nashua, while his GOP rival Mitt Romney will be in the state next week for an event in Manchester. Joe Biden will also travel north for a rally Monday.

On Friday, the president's campaign announced first lady Michelle Obama would travel to the Granite State next week for a rally at the University of New Hampshire, where she'll be joined by Caroline Kennedy. (UPDATE: Michelle Obama's event in New Hampshire was canceled Friday as the East Cost prepared for Hurricane Sandy.)

Polls, which showed New Hampshire leaning toward Obama in the summer and early fall, have recently tightened. An American Research Group survey taken October 9-11 showed Romney with a two point edge over Obama, 49%-47%. But a UNH poll taken October 17-21 showed Obama with the edge, leading Romney 49%-41%. Both polls were taken ahead of the final presidential debate.

Obama's team, looking to boost voter turnout in the state, has been airing an ad in New Hampshire and other battlegrounds harking back to the razor thin 2000 Florida presidential vote, using the 537-vote deficit in Florida that ultimately put George W. Bush in the White House to encourage Democrats to get out and vote.

Obama won the state by ten points in 2008, but Republicans were resurgent in the 2010 midterm elections, winning a seat in the U.S. Senate and the state's two House seats, which were previously held by Democrats.

New Hampshire will also be a key battleground in the fight for women voters. The first lady's trip to the state's largest university will underscore the Obama campaign's attempt to paint Romney as extreme on contraception and reproductive rights. New Hampshire Republicans have long been more conservative fiscally and more middle-of-the-road socially, making the push for social moderates all the more important for Obama's team.

The push for women voters in New Hampshire also carries ramifications beyond the presidential ballots. Female Democrats are vying for seats in three of the down-ballot races in the state as well. If they're all successful on November 6, New Hampshire would be the first state with a female governor, and an all-female Congressional delegation.