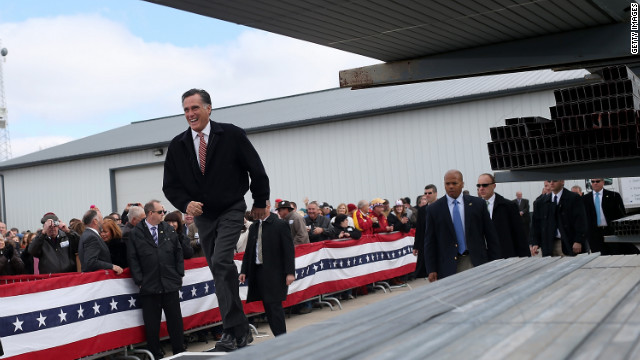 The Ending Spending Action Fund super PAC has printed 4.5 million magazine-style newspaper inserts that will appear as advertisements in more than 150 newspapers in five states in coming days, a source with knowledge of the group's activities told CNN.

The group has endorsed Romney's presidential bid, as well as several candidates running for the U.S. Senate: George Allen of Virginia, Ted Cruz of Texas, Deb Fischer of Nebraska, Jeff Flake of Arizona, Connie Mack of Florida, Josh Mandell of Ohio, and Richard Mourdock of Indiana. It also is backing the reelection bids of Sen. Orrin Hatch, a Utah Republican, and Sen. Clarie McCaskill, a Democrat from Missouri.

It backs "candidates who favor enhancing free enterprise, reducing the size of government, and balancing our nation's budget," according to its website.

The inserts will appear in newspapers in five key battleground states: Ohio, Florida, Iowa, Wisconsin, and Virginia, the source said.

This 12-page piece leads with Romney's biography, from his upbringing through his marriage, business career, wife's illness, and public service. The story emphasizes the influence upon Romney of his parents and his wife, Ann.

"Now as both Romneys fight for the presidency, they continue to be a team," it says, going on to cite Mrs. Romney's comments at the Republican National Convention that "no one will work harder, no one will care more" as president than her husband.

"Of all the people in the world, Ann Davies Romney should know," it reads.

The center spread compares Romney and President Barack Obama on their potential to "bring back job growth," resolve the "budget and deficit crisis" and work in a bipartisan fashion "to get things done." It highlights Romney's experience leading the Boston private equity firm, Bain Capital, the Salt Lake City Olympics, and the state of Massachusetts as governor.

It also recounts Romney's role in finding the missing daughter of a colleague; his rescue of a sinking boater near their New Hampshire lake house; support for his candidacy from golfer Jack Nicklaus; and former President Bill Clinton's comments that Romney led a "sterling business career."

There's also a crossword puzzle, with clues such as "Mitt Romney and Paul Ryan will create 12 million more" (19 down) and "The burger company where Paul Ryan worked as a kid" (1 down).

"The goal of this Mittzine is to show undecided voters why we believe Mitt Romney should be the next president," he said. "The central question asked is who should lead America for the next four years, and after reading this, we believe it's clear it should be Mitt Romney."

Among the television spots are ads that show voters explaining why they are voting for Romney this year after casting ballots for President Barack Obama in 2008. Former Rep. Artur Davis, who seconded Obama's nomination at the Democratic National Convention in 2008 but this year switched his party affiliation to the GOP and stumped for Romney.

Last spring, the group was in headlines involving a proposal to advertise for Romney using controversial race-related comments made Rev. Jeremiah A. Wright, Jr., Obama's former pastor. When video of the remarks was made public in 2008, Obama distanced himself from Wright.

The Ending Spending Action Fund said the proposal was drafted by a third-party consultant and never accepted. "It reflects an approach to politics that Mr. Ricketts rejects and it was never a plan to be accepted but only a suggestion for a direction to take," Baker said at the time.