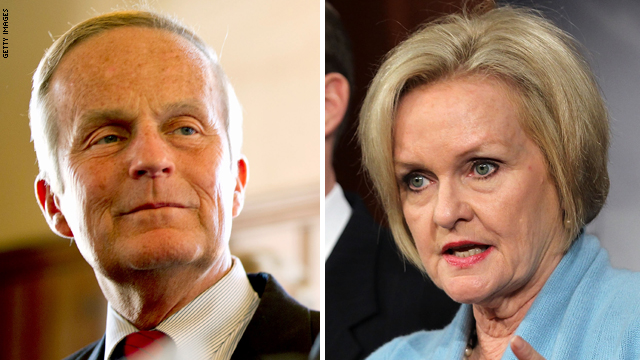 (CNN) - A new poll released Saturday indicates the contentious Senate race in Missouri between Sen. Claire McCaskill and Rep. Todd Akin is in a dead heat.

McCaskill, the Democratic incumbent, has the backing of 45% of likely voters in the state, compared to Akin's 43%, according to the Mason-Dixon poll commissioned by Missouri news outlets, including the St. Louis Post-Dispatch.

Because the margin is well within the sampling error, the two candidates remain statistically tied with 10 days before Election Day. Also significant, 9% of voters said they are undecided.

The race was expected to be a relatively smooth victory for the GOP, until Akin sparked an uproar in August when he argued the female body was biologically capable of blocking pregnancy in cases of "legitimate rape." While he apologized, the congressman quickly faced backlash from both Democrats and Republicans, many of whom called on Akin to withdraw his candidacy.

The same Mason-Dixon poll taken shortly after the dustup showed McCaskill with a nine-point advantage over her Republican challenger.

Akin, however, vowed to stay in the race and has since seen the return of some Republican support and money. The social conservative has also taken heat for making other comments in recent weeks about McCaskill, which critics quickly seized on and used to paint Akin as anti-women.

The new poll shows Akin's August remark had a sizeable impact on the race; three-quarters of those supporting his opponent say that Akin's "legitimate rape" comment was "somewhat" or "very" important for their decision.

Brad Coker of Mason-Dixon Polling & Research said the presidential race also appears to have a sharp role in the race.

"Two-thirds of voters are voting the economy and their pocketbooks. On those issues, Romney is hammering Obama," Coker told the Post-Dispatch. "Akin may be benefiting from that."

It's worth noting that shortly before the Republican primary in August, another Mason-Dixon poll showed Akin in third place, yet he captured a win in the three-person contest less than two weeks later.

For the survey, Mason-Dixon interviewed 625 registered Missouri voters, all of whom said they were likely to vote in November, by telephone from October 23 through October 25. The sampling error is plus or minus four percentage points.