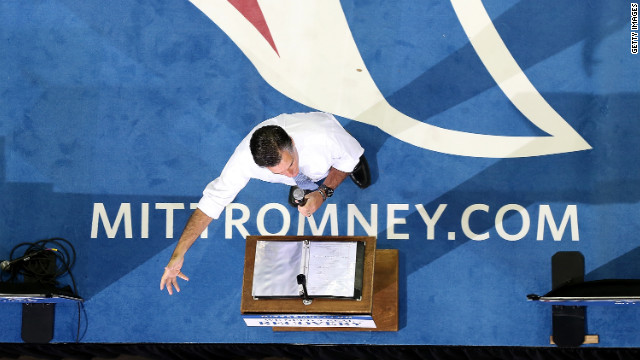 "I was looking forward to being in Virginia tomorrow, but you know the hurricane is headed up there," Romney told a crowd in Kissimmee, Florida. He added that he spoke to the state's governor, Bob McDonnell, who said first responders would need to focus on storm preparations.

Instead the Republican presidential nominee will head to Ohio, another crucial battleground, and join his running mate, Rep. Paul Ryan, on a previously scheduled bus tour.

"But I hope you'll keep the folks in Virginia and New Jersey and New York and all along the coast in your minds and in your hearts," he said. "You know how tough these hurricanes can be and our hearts goes out to them."

He later urged people in a Twitter post to support relief efforts by donating to the Red Cross.

Please support the #Sandy relief efforts by donating to the Red Cross. Text REDCROSS to 90999 or click here: rdcrss.org/PSpvi2

Romney's campaign on Friday had already nixed a Sunday evening event in Virginia Beach due to news of Hurricane Sandy's potential trajectory. However, the campaign further scrubbed its plans and decided to cross off events in Haymarket and Richmond.

The events were canceled as "a cautionary move so resources would not be diverted" in the state, according to Romney spokesman Rick Gorka.

"The campaign has been in contact with Governor McDonnell and his staff," Gorka said.

Earlier in the day McDonnell, a top Romney surrogate, also commented on the storm's approach, describing the GOP nominee's decision as "very prudent."

"We have been in regular communication with the Romney campaign and they determined that it would be best for public safety in the state that they cancel their events," McDonnell continued in a statement. "I thank them for this decision and appreciate their concern for public safety in Virginia."

Meanwhile, President Barack Obama is slated to travel to Orlando, Florida on Sunday. Jen Psaki, the president's traveling campaign press secretary, told reporters Saturday aboard Air Force One the campaign could not "predict" the impact of the storm or how it may affect early voting in certain states. She added the campaign, along with the administration, were "monitoring this day by day."

The Category 1 storm moved slowly off the coast of South Carolina on Saturday, having left at least 45 dead in its wake in the Caribbean and Central America.

It is expected to begin seriously affecting heavily populated coastal areas in the East as early as Sunday.

- CNN's Gregory Wallace and Peter Hamby contributed to this report.