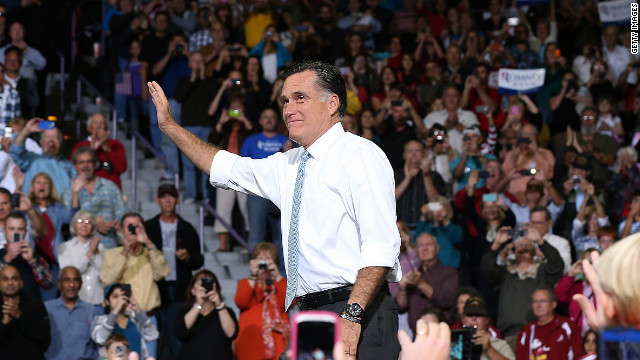 While the editorial praised both Romney and Obama, the decision ultimately came down to one question, the newspaper stated. "Which candidate could forge the compromises in Congress to achieve these goals? When the question is framed in those terms, Mitt Romney emerges the stronger candidate."

According to the announcement, the editorial board, which enthusiastically endorsed Romney ahead of the state's Republican presidential caucuses in January, had "a vigorous debate" over which candidate to choose for the November election.

While "Romney has made rebuilding the economy his No. 1 campaign priority," the paper stated, "the president's best efforts to resuscitate the stumbling economy have fallen short. Nothing indicates it would change with a second term in the White House."

The editorial board said the country needed a "renewed sense of confidence" in the economy. "That should come with Mitt Romney in the White House."

With six electoral votes, the swing state is highly contentious territory in the tight presidential race. The president campaigned in the Hawkeye State on Wednesday, while Romney was also in the state Wednesday, as well as Friday.

An NBC News/Wall Street Journal/Marist poll released last week indicated the president was ahead of Romney by 8 points, 51% to 43%, while a separate American Research Group survey released days earlier showed the two candidates tied at 48%.

Obama frequently points to Iowa as the state that launched him on the path to winning the Democratic nomination in 2008. During the state's caucuses, the then-Illinois senator captured a surprising victory over then-Sen. Hillary Clinton and former Sen. John Edwards.

Saturday's editorial stated that Romney's record as Massachusetts governor proved he could work across the aisle and would be more likely to bridge Congress and the White House than Obama would in a second term.

It continued: "Voters should give Mitt Romney a chance to correct the nation's fiscal course and to implode the partisan gridlock that has shackled Washington and the rest of America - with the understanding that he would face the same assessment in four years if he does not succeed."

Earlier this week, the paper blasted the Obama campaign after the president sat down with the editorial board for an interview Tuesday but refused to go on the record.

The newspaper's editor, Rick Green, wrote in a blog post that Obama's team should have granted the paper an on-the-record interview, as Romney did earlier in the month, saying the president's remarks in the private conversation would have helped undecided Iowa voters make up their minds.

"What the President shared with us this morning - and the manner, depth and quality of his presentation - would have been well-received by not only his base, but also undecideds. From a voter standpoint, keeping it off-the-record was a disservice," Green wrote.

Green added that, despite their frustration with the Obama campaign, the dust-up would not have an effect on their endorsement decision.

The following day, the campaign released the transcript to the Des Moines Register, which then posted the interview online. In the interview, Obama said he is confident his administration will pass immigration reform next year and achieve the equivalent of a grand bargain with Congress.

The Des Moines Register endorsed Obama in 2008 and Sen. John Kerry in 2004. The last time it backed a Republican was in 1972 with its support for Richard Nixon.