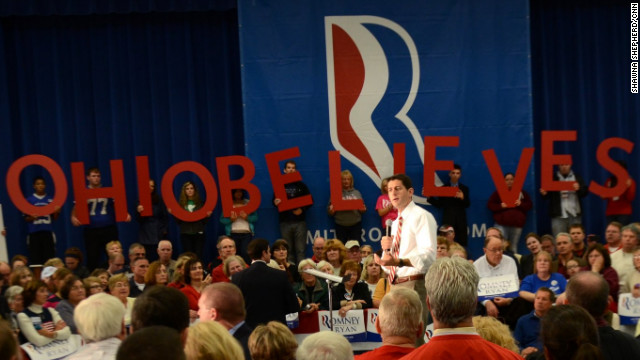 Zanesville, Ohio (CNN) - Paul Ryan made a direct appeal to blue collar voters in struggling manufacturing towns of Ohio where he kicked off his eight-stop tour across the battleground state on Saturday.

With the presidential election in just 10 days, the Republican vice presidential nominee bolstered the credentials of GOP nominee Mitt Romney as a job creator and himself as someone who understands what people struggling for work in an uneven economy are going through.

At the same rally, held on the factory floor of Gradall Industries, he said Romney, "helped start a steel plant in Indiana ... that is still providing jobs," which would have occurred when he led Boston private equity firm Bain Capital.

Ryan warned Ohioans of misleading Democratic attacks against Romney. He said, "Hundreds of millions of dollars of negative ads have been spent in Ohio and around the other parts of the Midwest to try and disqualify this man."

At his second rally on a chilly rain-soaked day in Zanesville, the seven-term congressman talked about the economic struggles in his hometown of Janesville, Wisconsin, after General Motors closed a plant there in 2009.

"Now Janesville is not all that different from Zanesville, not just in the j and the z but in the kind of towns we are," said Ryan. "In my hometown, we lost a big factory and there were a few factories that fed that factory … and we used to say: As GM goes so goes Janesville," he said.

Ryan told Ohioans that those jobs are "gone right now" and the economy is not strong enough to replace them.

This weekend, Ryan will make eight stops in Ohio where 18 electoral votes are at stake and a new CNN poll shows President Barack Obama holding a narrow lead within the survey's margin of error.

"Ten days to go. The debate is occurring and on November 6th you make the choice," Ryan said. "And as you know, just like they used to say it – as GM goes so goes Janesville? As Ohio goes, so goes America. I think you know that."