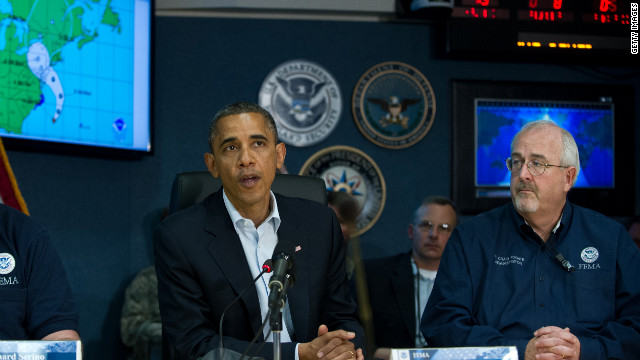 Obama advises preparedness ahead of storm

Washington (CNN) - President Barack Obama warned Sunday that Hurricane Sandy should be taken seriously, but said the federal government has resources ready to deal with the storm.

"You need to take this seriously and take guidance from state and local officials," Obama said at the Federal Emergency Management Agency headquarters in Washington.

"This hasn't hit landfall yet," he said. "So we don't yet know where it’s going to hit, where we're going to see the biggest impacts and that's exactly why it's so important for us to respond big and respond fast as local information starts coming in."

Before speaking to reporters, Obama said he met with officials from FEMA and other agencies, as well as spoke by phone with governors and mayors whose states and cities may be impacted by the storm.

Obama said he is "confident that the resources are in place."

"My main message is we have to take this seriously," he said. "The federal government is working effectively with the state and local governments."

As of Sunday afternoon, Sandy was a Category 1 hurricane churning off the U.S. East Coast with 75 miles per hour winds. The storm is expected to hover over to northeast and dump up to a foot of rain in some areas, as well as combine with an inland snowstorm which could produce several feet of snow, according to the CNN Weather Unit.

Governors up and down the East Coast declared states of emergency and some put the National Guard at the ready.

With Election Day just over a week away, and early voting underway in several states, Obama said "we don't anticipate" the storm impacting voting, "but we're obviously going to have to take a look."

Obama modified his Monday and Tuesday campaign schedule to return to Washington to monitor the storm, his campaign said.

- CNN's Gregory Wallace and Chad Myers contributed to this report