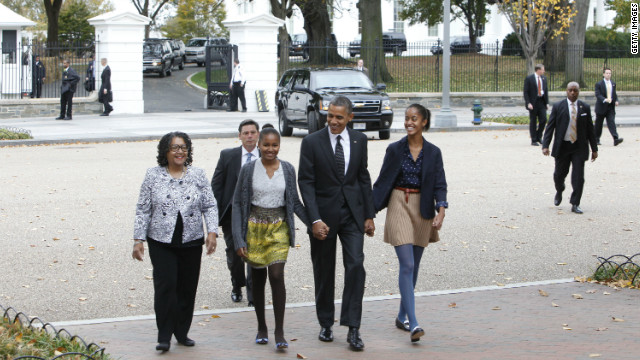 Washington (CNN) - President Barack Obama spent Sunday morning attending a church service with his daughters, with plans for a briefing on Hurricane Sandy and travel to Florida later in the day.

Obama, his daughters - Sasha and Malia - and their godmother, Kaye Wilson, a family friend, walked to St. John's Church, the Episcopal house of worship across from the White House.

Obama joined about 150 other attendees at a service where a prayer was said "for Barack, our president, the leaders of Congress, the Supreme Court, and all who are in authority, for Afghanistan, Haiti and the Middle East, for this community, the nation and the world."

Later in the day, Obama will attend a briefing on Hurricane Sandy at the Washington headquarters of the Federal Emergency Management Agency, a White House official said.

The White House announced Saturday the cancellation of some campaign events on Monday and Tuesday so the president can return to Washington and monitor the storm, which is expected to affect the U.S. East Coast on Sunday and into the week.

Obama is scheduled to leave Washington on Sunday evening for Florida, where he plans to hold the first of two campaign rallies on Monday. Former President Bill Clinton will join Obama on the trail Monday, Obama's campaign said.