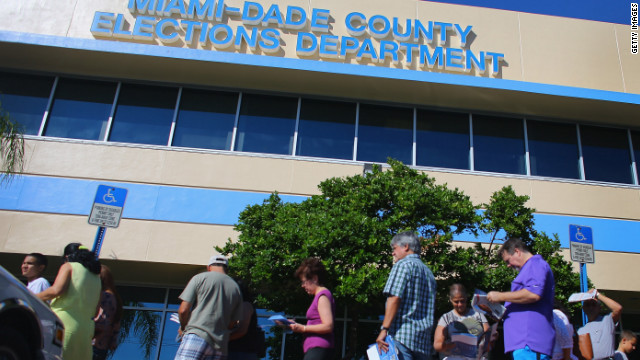 (CNN) – Two new polls released Sunday break down the state of the presidential race in Florida, whose 29 electoral votes are being fiercely contested in the final days of the campaign.

The surveys indicated GOP nominee Mitt Romney ahead along the central I-4 corridor, while President Barack Obama is ahead in Miami Dade County, the state's largest.

The Tampa Bay Times/Bay News 9 poll surveyed likely voters along Interstate 4 in the Sunshine State, which stretches from Tampa, on the Gulf coast, to Daytona Beach, on the Atlantic coast. That section of the state has swung for both Democrats and Republicans in the past, and straddles the reliably red panhandle in the north, and the more blue sections of South Florida.

The poll showed Romney at 51% among likely voters along the stretch, compared to 45% who support Obama. Four percent remained undecided. That result was within the poll's sampling error of plus or minus four percentage points.

Romney led among independents 49%-41%, and among men by a sixteen point margin. While Obama led among women, it was not by as large a margin as other polls have shown in different parts of the country. Fifty percent of women along the I-4 corridor support Obama, compared to 46% who support Romney.

Broken down, the poll showed divisions among voters along the stretch – Romney was leading among white voters, while Obama led among African-Americans and Hispanics, who accounted for 20% of the total number of voters in the Tampa Bay Times/Bay News 9 poll.

"Romney has pretty much nailed down Florida," Coker said. "Unless something dramatically changes – an October surprise, a major gaffe – Romney's going to win Florida."

A second survey from the Miami Herald showed Obama leading Romney 52%-43% in Miami Dade County, which is Florida's largest. That lead is smaller than the sixteen point margin Obama won the county by in 2008, but is just outside the sampling error of plus or minus four percentage points.

Among men in Miami Dade, both Obama and Romney were at 47%, but among women Obama held a large advantage, leading his rival 56%-40%.

A big majority of Hispanics – 62% - went for Romney in the survey, a result of the large population of traditionally conservative Cuban-Americans in the region. Broken down, 76% of Cuban-Americans were behind Romney, while 56% of non-Cuban Hispanics said they would vote for Obama.

Both the I-4 Corridor survey and the Miami Dade County poll were conducted by Mason Dixon polling group, which is based in Jacksonville, Florida. The dates of the polls were also the same – October 22-24, meaning there were two days of polling completely after the final presidential debate.

The Miami Herald survey was conducted by telephone in both English and Spanish from 625 likely voters in Miami-Dade County. The sampling error was plus or minus four percentage points.

The I-4 Corridor survey was also from 625 likely voters, and the sampling error was the same.