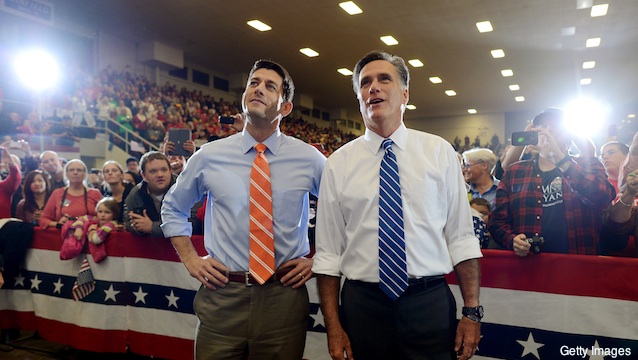 Marion, Ohio (CNN) - Mitt Romney and Paul Ryan increasingly framed the upcoming election as a historic choice about the country's future, telling Ohio audiences Sunday they were up to the challenge of bridging Washington's partisan divide.

“This is not your run-of-the-mill presidential election," Ryan told an audience in Findlay, saying the outcome November 6 would determine "what kind of people we're going to be."

Romney, the GOP presidential nominee, declared the election "a turning point" that called for "dramatic and real change," and repeatedly told supporters he would achieve the sort of bipartisan agreement he said has eluded President Barack Obama.

"I've got to find - I know there are good Democrats who love America just like we do," Romney told an audience of more than a thousand at his first stop in Celina. "I’m going to reach across the aisle to them and work together, put the interests of the people ahead of the politicians."

His campaign also decided to cancel a Tuesday stop in New Hampshire "due to the concern for the well-being of residents" in the storm's path, according to a spokesman.

As rain began to drench northern Ohio, Romney urged an energetic audience of thousands in Marion to reach out to disaffected Democrats still hedging on the upcoming vote.

"And that’s not always easy," Romney continued, "but you can ask them this question, you can say: 'Do you think everything’s going just fine?'"

"No!" the audience yelled in response.

Sen. Rob Portman, who traveled with the two candidates all day, joined a chorus of Ohio officials sounding an optimistic note on Romney's prospects in the crucial swing state.

"It’s the fourth quarter. It’s a tie game but we’re in the red zone, folks, we’ve got the momentum on our side," he said.

Responding to the trio of events, a spokeswoman for the Obama campaign charged Romney's record didn't match his rhetoric.

“The American people can’t trust a word Mitt Romney says, especially when he claims he’d work across the aisle as president," said spokeswoman Lis Smith. "As governor, he refused to work with Democrats in the legislature. And throughout this campaign, he’s refused to stand up to the most extreme voices in his own party – look no further than his continued support for Richard Mourdock," the Indiana Senate candidate whose comments on rape sparked an uproar last week.