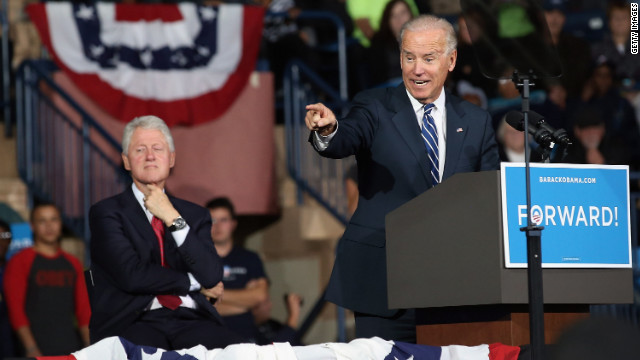 Youngstown, Ohio (CNN) – It was like watching a tag team of a popular, political heavyweight and a scrappy contender against one fierce and determined opponent.

On Monday, former president Bill Clinton and Vice President Joe Biden entered the arena - battleground Ohio - and launched a double whammy of pushback against a fresh, yet dubious, claim from Republican presidential nominee Mitt Romney. Among the duo's fighting words: essentially accusing Romney of stating "the biggest load of bull;" claiming the Republican nominee will say "anything to win;" and raising a question politicians reserve for only the most egregious arguments: "Have they no shame?"

The Romney campaign has accused their opponents of "desperate arguments."

At issue: the Romney campaign's fresh assertion that President Obama's actions in the auto bailout caused carmaker Jeep to manufacture Jeeps in China.

A new Romney ad, running in Ohio, stated: "Obama took GM and Chrysler into bankruptcy and sold Chrysler to Italians who are going to build Jeeps in China." On Friday, Romney himself said: "I saw a story today that one of the great manufacturers of this state, Jeep, now owned by the Italians, is thinking of moving all production to China."

To that, Clinton swung first.

During a joint campaign rally with Biden in Youngstown, the 42nd president revealed a phone call he'd had with the president.

"I saw the reports of Gov. Romney's latest ad saying that the president had allowed Jeep to move to China," Clinton said. "And so this morning, before [Obama] left Florida and went back to Washington, he said, 'You know, of all the things Gov. Romney has said, that probably hurts my feelings the most'."

Clinton continued: "[Obama] said, 'You know, I never had any money when I was a kid. And the first new car I ever owned, I was 30 years old. And it was a Jeep. I would never move Jeep to China."

Clinton followed up the sentimental story with a hammer.

"Now it turns out, Jeep is reopening in China because they've made so much money here, they can afford to do it and they are going on with their plans here," Clinton said.

"They put out a statement today saying it was the biggest load of bull in the world that they would ever consider shutting down their American operations."

Though it did not exactly say "load of bull" – a Chrysler statement did characterize the Romney campaign's claim as false.

Chrysler Senior Vice President of Corporate Communications Gualberto Ranieri wrote in an online posting: "Let's set the record straight: Jeep has no intention of shifting production of its Jeep models out of North America to China."

"As we say in my faith, 'Bless me Father for I have sinned,'" Biden, a Catholic, mocked. "I mean, what are you talking about? I have never seen anything like that."

"It's an absolutely, patently false assertion."

Yet in the next breath, he made an assertion that many politicians use sparingly.

"Ladies and gentlemen, have they no shame?" Biden said, lumping Romney and running mate Rep. Paul Ryan together.

"Romney will say anything, absolutely anything to win, it seems."

Biden and Clinton also slammed Romney for, what the campaign asserts, are changing explanations over his initial opposition to the auto bailout.

Though Romney argued for a managed bankruptcy at General Motors and Chrysler – and insists he did not favor letting the companies go out of business – his stance has been widely unpopular among many voters, especially some in Ohio, which relies heavily on the auto industry.

Clinton claimed Romney "ties himself in more knots than a Boy Scout in a knot tying contest" trying to explain his bailout stance.

Biden said: "This guy pirouettes more than a ballerina."

The Romney campaign was swift to respond.

"Today, Vice President Biden falsely claimed that Mitt Romney wanted to 'liquidate' the auto industry, and was dishonest about the Administration's own record," Romney spokesman Ryan Williams said in a statement emailed to reporters. "Mitt Romney's support for loan guarantees and warranties for the U.S. auto industry is clear."

"The Obama campaign is less concerned with engaging in a meaningful conversation about his failed policies and more concerned with arguing against facts about their record they dislike. Ohioans see these desperate arguments for what they are, and will choose Governor Romney's positive agenda over President Obama's increasingly desperate attacks."

The statement did not directly respond to Clinton and Biden's slams against the Romney campaign's claim about Jeep moving operations to China.

The rally was a headline event given the Obama campaign's cancellations of other rallies due to Hurricane Sandy.

Both men opened their remarks on that note.

Referring to the president's abrupt Florida trip, Clinton said: "[Obama] got up this morning and called me and said, 'I got to go back right now. This storm's getting out of hand. I got to handle it.' And I said, 'Mr. President, that is the right call'."

"Folks, I know you were expecting the real president…I just want you to know he asked me to express his regrets for not being able to be here. But you know, he's doing the job a president should be doing."

"First and foremost, on behalf of the president, I want to thank all the first responders throughout this country. You know, there are folks from all over America heading to my part of the world to the East Coast to help now. They're coming from all over. There's folks from Ohio heading east. There's a whole lot of folks all over the country. And it's further evidence…that when America stands together we're all better off."