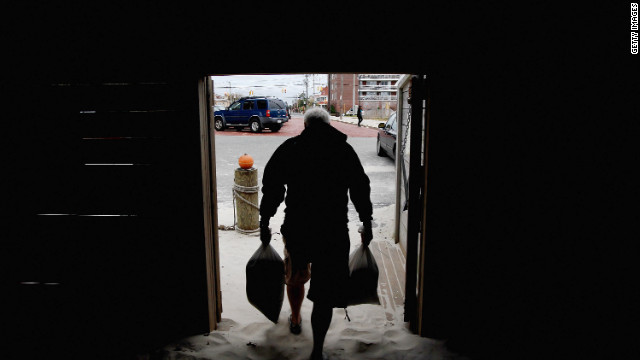 BREAKING: SANDY COULD DELAY JOBS REPORT… Hurricane Sandy could delay the release of the highly-anticipated October jobs report set for this Friday. The report is normally released at 8:30 a.m. ET the first Friday of the month. This month's report is the final reading on the health of the job market before the presidential election. The Bureau of Labor Statistics said Monday it hopes to stay on the normal schedule and is working hard to try to do so. But because of the shutdown of federal offices due to the storm, the department is not certain whether it will be able to meet that schedule. – Chris Isidore

DEVELOPING: CNN’s FLORIDA POLL: 50 – 49, ROMNEY ON TOP… It's still a tight race in Florida, with 50% of likely voters choosing Mitt Romney and 49% picking Barack Obama. There is a slightly larger pool of persuadable voters, often called "uncommitted voters" in this election cycle. Roughly 5% of Florida's likely voters say they are truly undecided or have a preference but have not completely made up their minds. Those are the voters in whose hands rest the outcome in the Sunshine State - and possibly the national outcome as well. – Keating Holland

SOCIAL WATCH: Sandy Trumps Politics – And Baseball – On Facebook
Hurricane Sandy is registering a 7.12 on Facebook's 'Talk Meter' scale, which ranks overall chatter around an event of topic on a scale from 1-10. The World Series Monday night reeled in a 6.71 on the scale, while President Barack Obama and Republican nominee Mitt Romney are only registering a 3.86 and a 3.5 respectively.

TRAIL TRIVIA
(Answer below)
When was the last time the New York Subway and the Washington, D.C. Metro were preemptively closed on the same day?

The power of Mother Nature and the visceral fear of natural disaster took a presidential campaign at the height of its last frenzied push into an odd paralysis.

“Everyone talks about the weather, but no one does anything about it,” Mark Twain wryly noted. Today was a great example of political jockeying over a story that neither campaign can completely control.

Yes, there are days when incumbency has its advantages, and today is one of them, thanks to Hurricane Sandy.

First, the White House announced that the president would be convening a meeting in the White House’s Situation Room to be briefed on the hurricane before he would address the nation. Then, standing in front of the presidential seal, Barack Obama was able to wear two hats at one time – commander-in-chief and campaigner-in-chief.

Obama was speaking as the president of the United States, but it is hard not to think that politically this destructive storm provides him with an opportunity to flex his leadership muscles one week before the election.

Romney on the other hand stressed prayers – and donations to relief agencies, “On the eastern coast of our nation a lot of people are enduring some very difficult times. And our hearts and our prayers go to them as we think about how tough it's going to be there… I'd like to ask you who are here today to think about making a contribution to the Red Cross or to another relief agency; to be of help if you possibly can in any way you can imagine to help those who are in harm's way.”

So there is perhaps a political silver lining in this news cycle, as even when a Pew poll puts the presidential release in a national dead heat, a storm named Sandy has humbled even the highest level in politics, changing the tone of the campaign’s final days from harsh rhetoric to bi-partisan prayers.

Leading CNNPolitics: Sandy introduces big unknown into campaign
The beauty of being a president and a candidate is that when a monster storm stalks up the East Coast you can run over to the Federal Emergency Management Agency and be seen as a president on the job. Which also works if you are reapplying. – Candy Crowley

Leading Drudge: Ocean Becomes Bay
The latest models have Sandy making landfall along the coast of South Jersey on Monday evening between 8 and 10 p.m. “This storm is HISTORIC,” said CBS 3 meteorologist Katie Fehlinger on her Twitter page.

Leading HuffPo: Recipe For Disaster – Mitt To America: Sink Or Swim
During a CNN debate at the height of the GOP primary, Mitt Romney was asked, in the context of the Joplin disaster and FEMA's cash crunch, whether the agency should be shuttered so that states can individually take over responsibility for disaster response. – Ryan Grim

Gut Check Full Service: The Romney campaign’s Amanda Henneberg tells CNN: "Gov. Romney believes that states should be in charge of emergency management in responding to storms and other natural disasters in their jurisdictions. …This includes help from the federal government and FEMA."

Leading Politico: 4 possible freak election outcomes
Could the 2012 campaign end in a tie? Is it possible for Mitt Romney to end up as president — with Joe Biden as his vice president? Could the presidential election end up decided by the U.S. Supreme Court, again? The short answer is: probably not. To call those outcomes improbable would be a huge understatement. The strong likelihood is that one candidate will win both the Electoral College and the popular vote on Nov. 6 and bring our long 2012 slog to an end. – Alexander Burns and Emily Schultheis

Leading The New York Times: Storm Roils Campaign as Obama Cancels Appearance
President Obama on Monday morning abandoned political campaigning in the face of the huge storm barreling down on the East Coast, canceling an appearance in Florida and quickly heading back to Washington to coordinate emergency response from the White House. – Michael Shear and Mark Landler

- Clinton attempts to poke holes in Romney’s 12 million job pledge -
BILL CLINTON AT A CAMPAIGN EVENT IN FLORIDA: “Now folks, let me tell you what's fixin' to happen. Have you seen where Governor Romney wants to close the deal by promising us 12 million jobs over the next four years? You’ve seen that, right? Doesn't say how, just ‘people love me so much they'll throw jobs at us.’ Actually it's not a crazy deal. You want to know why? Because two highly respected non-political analysts – Moody's and a group called Microeconomic Advisers – they say we're going to get 12 million jobs over the next four years because of what President Obama’s already done if they just don't mess it up.”

- Romney says America ‘forewarned’ -
MITT ROMNEY AT A CAMPAIGN EVENT IN OHIO: “People in this country are having hard times under this president's economic policies. And when asked what he's going to do to get this economy going during the debates, we've had four of them – three presidential and one vice presidential – there hasn't been an agenda. The president hasn't been able to lay something out other than to say we're going to stay the course and continue down the same road. He calls it going forward. I call it forewarned.”

- Obama campaign confident that Romney campaign is not expanding the map -
JIM MESSINA, OBAMA CAMPAIGN MANAGER, ON A CONFERENCE CALL WITH REPORTERS: “If the Romney campaign put as much effort into its ground game as they did in trying to twist the truth, maybe they'd be better in shape then they are in eight days out. The Romney campaign wants you to think it's expanding the map but it's not. … In the final days of this campaign, the data and facts are on our side, and the spin and wishful thinking on theirs.”

Ali Weinberg (@AliNBCNews)
In briefing room POTUS says America needs to "set aside whatever issues we have ... to make sure we respond appropriately and w/ swiftness"

Kevin Bohn (@KevinBohnCNN)
GOP super PACs go up with $3 million in PA. Messina says Obama campaign will now go up there. "We are not taking anything for granted."

David Leonhardt (@DLeonhardt)
Current polls suggest the presidential race is remarkably similar to the way it looked this summer: http://nyti.ms/VXWfMb

When the public transit authorities in Washington, D.C., and New York decided on Sunday night that their transit systems would not operate on Monday, it was the first time in history that both cities preemptively closed their subway, bus and rail lines.

According to the Atlantic, the first outlet to release this factoid, these closures were particularly unique because they were announced before the serious parts of the storm even hit.

According to Washington Area Metro Transit Authority, the last time Metro preemptively closed service was in 2003 for Hurricane Isabel.

The last - and only time - the New York Metropolitan Transit Authority preemptively closed service was in 2011 for Hurricane Irene.

Congrats to CNNer David Daniel (@CNNLADavid) for correctly answering today’s Gut Check Trivia Question. What does David know about hurricanes, though? He is out in beautiful LA, where the temperature at publication time registered “79 degrees and sunny.” Sigh.