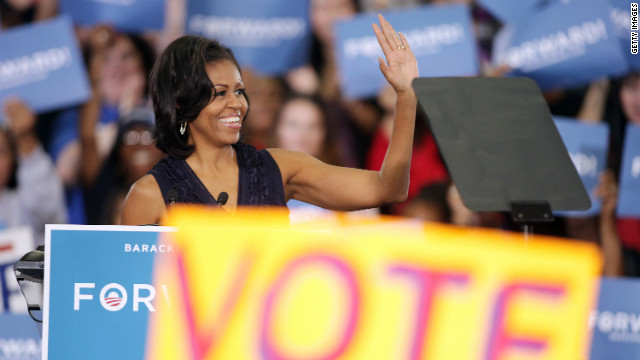 Iowa City, Iowa (CNN) - Her husband may be taking a hiatus from the campaign trail, but first lady Michelle Obama isn't.

She told an audience of supporters in Iowa on Monday that President Obama is putting his political schedule on hold to make Hurricane Sandy "his priority."

"Our thoughts and prayers are with everyone affected by Hurricane Sandy," she said at a rally in Iowa City that drew about 800 people. "And Barack has assured state and local authorities that he is going to cut through the red tape and be there to assist with whatever resources and support we need over the next few days."

She added, "He has made this storm his priority, and he is going to do whatever it takes to make sure the American people are safe and secure."

The first lady has another Iowa campaign stop later Monday in Sioux City.

Mitt Romney's wife Ann is also on the campaign trail today, making an appearance in Michigan.