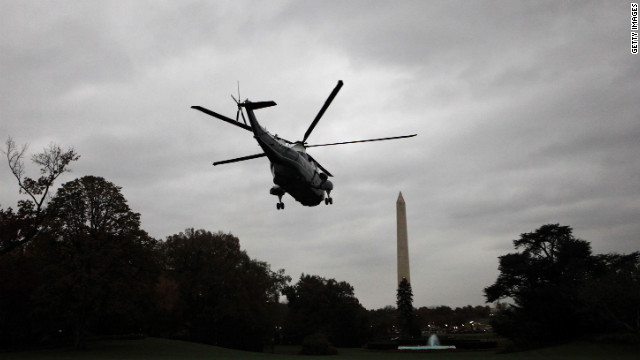 UPDATE 4:38 p.m. Monday: Vice President Joe Biden's Tuesday events in Ohio and Thursday event in Scranton, Pennsylvania have been canceled, his office said, out of "an abundance of caution to ensure that all local law enforcement and emergency management resources can stay focused on ensuring the safety of people who might be impacted by the storm."

UPDATE 9:53 a.m. Monday: Obama scrapped his remaining Tuesday campaign schedule as well, Carney announced. Obama was scheduled to stump in Green Bay, Wisconsin. "As he said at FEMA HQ yesterday, the President has instructed his team to make sure that needed federal resources are in place to support state and local recovery efforts," Carney said.

UPDATE 7:05 a.m. Monday: Carney said Monday that Obama would return to Washington instead of attending the campaign rally in Orlando. "Due to deteriorating weather conditions in the Washington area, the President will not attend today's campaign event in Orlando," Carney wrote. "The President will return to the White House to monitor the preparations for and early response to Hurricane Sandy."

(CNN) - President Barack Obama has scrapped his plans to campaign in Ohio on Monday as a severe storm roars up the U.S East Coast, his press secretary Jay Carney said in a Sunday evening statement.

"Tomorrow, the President will return to the White House following his event in Orlando, FL, to monitor Hurricane Sandy, which is currently forecast to make landfall along the Eastern seaboard later tomorrow," Carney wrote. "The event in Youngstown, OH, will move forward with President Clinton and include Vice President Biden."

The cancellation is the latest shift to the the president and Mitt Romney's campaign schedules in the final week of stumping before Election Day.

On Saturday, Obama’s campaign canceled another Monday event in Virginia, as well as a Tuesday morning event in Colorado.

Romney canceled his Sunday plans to campaign in Virginia, which is in the storm’s path, and instead joined his running mate Paul Ryan for events in Ohio.  The GOP presidential nominee is scheduled to campaign in Ohio, Iowa and Wisconsin on Monday, then in Ohio on Tuesday. A Romney campaign stop scheduled for Tuesday in New Hampshire was canceled late Sunday afternoon, the campaign announced in an e-mail.

Hurricane Sandy pelted parts of the Atlantic coastline and is expected to slowly move northward as the week begins.  The Category 1 hurricane had sustained winds of 75 miles per hour and gusts of up to 90 mph.

Several governors have declared states of emergency and put their National Guard on standby.

On Sunday, politicos from both sides said it was still too early to tell how the storm would affect the race for the White House, but that access to voting centers would be a concern if effects from the storm persist until Election Day.

Obama said Sunday after meeting with federal, state, and local emergency management officials that those in the storm’s path “need to take this seriously,” adding he is "confident that the resources are in place."

- CNN’s Kevin Liptak, and Gregory Wallace contributed to this report.