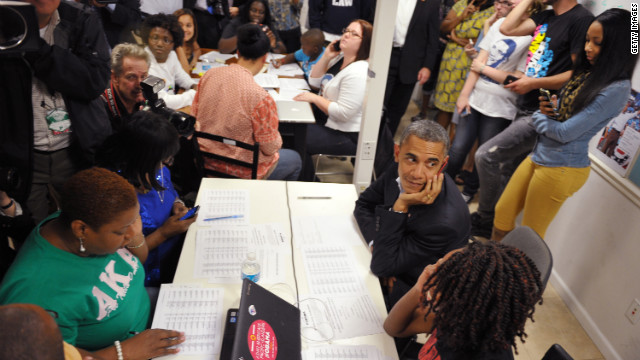 (CNN) – Top advisers to President Barack Obama's presidential campaign exuded a bold confidence on their chances in critical battlegrounds Monday, saying the resources they were putting into final stretch efforts were a sign of their candidate's advantage on November 6.

"You're going to get spun and spun and spun in the next week," senior adviser David Axelrod told reporters on a conference call, before launching into the Obama campaign's version of reality on the ground. "What I would urge you to do is to focus on the facts, focus on the data, focus on the trends in the states, and if you do it will lead you to the same conclusion."

Jim Messina, Obama's campaign manager, said Romney's campaign was utilizing a combination of misdirection and outright lies to make themselves out to be ahead in states like Ohio and Virginia.

"In the final days of this campaign, the data and facts are on our side, and the spin and wishful thinking on theirs," Messina said, pointing to "small but important" leads for the president in the states that will ultimately decide the election's outcome.

Those states include Ohio, where a CNN Poll of Polls that averages the newest polls in the state indicates Obama with a three point edge over Romney, and Virginia, which a Washington Post poll Saturday showed to be a close race, with Obama four points ahead of his rival, but within the survey's sampling error.

"Romney is not where he wanted to be 8 days out," Messina said. "He's down everywhere he needs to be up. He's stooping to desperate attacks. Bluffing about the momentum he doesn't have, and releasing one of the most misleading, hypocritical and indefensible ads we've ever seen in a presidential race."

That ad, which began airing in Toledo on Saturday morning, claims Romney would be a better advocate than Obama for the American auto industry if he's elected president.

The narrator says in the spot that "Obama took GM and Chrysler into bankruptcy, and sold Chrysler to Italians who are going to build Jeeps in China. Mitt Romney will fight for every American job."

A spokesman for Chrysler had earlier emphatically denied that report, but a Romney campaign spokeswoman defended the ad Monday, saying Messina's criticism of the spot reflected his team's desperation.

"It appears the Obama campaign is less concerned with engaging in a meaningful conversation about the President's failed policies and more concerned with arguing against facts about their record they dislike," Amanda Henneberg said.

"If the Romney campaign put as much effort into their ground game as they did in to trying to twist the trust, maybe they'd be in better shape than they are 8 days out," Messina said on the call. "The Romney campaign wants you to think it's expanding the map but it's not."

Yet polls in other states do show an increasingly tightening race where Obama once held a solid lead. In Minnesota, a poll released Sunday showed a close race between the two candidates in a state long considered a safe bet for Democrats. That Star Tribune survey showed Obama at 47% and Romney at 44%.

Both Minnesota polls were within the sampling error.

On Monday, Obama's campaign announced that former President Bill Clinton, a top surrogate in the closing days of the race, would travel to Minnesota to stump for the president.

Axelrod said the Obama team was "not going to surrender any territory there," but said he was confident of a win in the Land of 10,000 Lakes.

Another state that once seemed a lock for Obama, Pennsylvania, has also become tighter as Election Day draws near. A poll taken October 23-25 for the Philadelphia Inquirer showed the race within the sampling error in the Keystone State – 49% of likely voters supported Obama and 43% supported Romney.

Obama resources are also headed there – Vice President Joe Biden will stump in his hometown of Scranton on Thursday, and Messina said on Monday's call that the campaign would begin airing an commercial in the state to counter a $2.1 million Pennsylvania ad buy from Restore Our Future, the pro-Romney super PAC.

"We're not going to take anything for granted," Messina said.

Rich Beeson, the Romney campaign political director, said the Obama campaign call was a continuation of "desperate and flailing spin in an attempt to explain why suddenly states that were never considered in play are up for grabs."