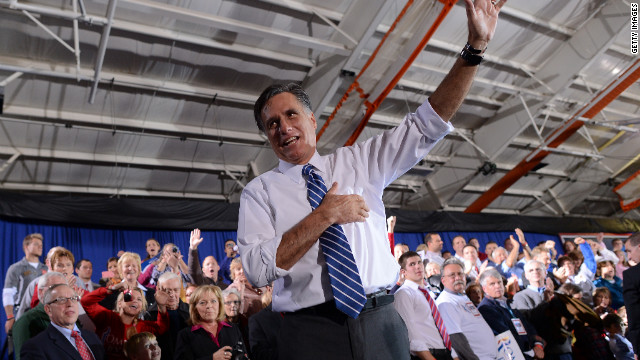 (CNN) - Mitt Romney's campaign canceled the Republican presidential nominee's event Monday night in Wisconsin out of sensitivity for Americans being pummeled by rain and wind from Hurricane Sandy.

The campaign also announced that Rep. Paul Ryan's events in Melbourne and Lakeland, Florida are also being canceled, and both candidates' events for Tuesday are also being scrubbed.

"Out of sensitivity for the millions of Americans in the path of Hurricane Sandy, we are canceling tonight's events with Governor Romney in Wisconsin and Congressman Ryan in Melbourne and Lakeland, Florida," said Romney Communications Director Gail Gitcho in a statement sent to reporters just before noon ET on Monday.

Romney did hold an event in Avon Lake, Ohio, Monday morning and was still scheduled to campaign in Davenport, Iowa, later in the day.

At the Ohio event Romney asked supporters to consider making a contribution to a relief agency.

"We've faced these kind of challenges before and as we have it's interesting to see Americans come together, and this looks like another time when we need to come together all across the country, even here in Ohio, and make sure that we give our support to the people who need it," said Romney.

President Barack Obama woke up in Florida early Monday, but quickly flew back to Washington, D.C., to monitor federal emergency response preparations for the hurricane.

"The President will return to the White House to monitor the preparations for and early response to Hurricane Sandy," said White House Press Secretary Jay Carney.

Carney also announced that the president was canceling his Tuesday campaign visit to Wisconsin.

Former President Bill Clinton, who was accompanying Obama at the Orlando event, was set to headline the rally. The former president is also scheduled to team up with Vice President Joe Biden at a rally in Youngstown, Ohio Monday afternoon. The president had originally planned to take part in the Ohio event before canceling this weekend.